Bamfurlong is a small village in the Metropolitan Borough of Wigan, Greater Manchester, England.

It lies approximately 5 miles south of Wigan town centre and 2 miles to the north of Ashton-in-Makerfield. Bamfurlong has a population of around 2,500 people. 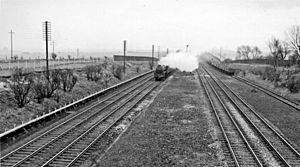 Remains of the station in 1962

Bamfurlong is within the ward of Abram. For transport it is close to the M6 motorway. Bamfurlong railway station served the village from 1832 until closure in 1950.

The proposed High Speed 2 line coming from the south will connect to the classic West Coast Main Line at the site of the closed station, allowing high-speed services to continue north on slower tracks to Wigan North Western, Carlisle, Edinburgh Waverley and Glasgow Central, although no station will be built in the village.

All content from Kiddle encyclopedia articles (including the article images and facts) can be freely used under Attribution-ShareAlike license, unless stated otherwise. Cite this article:
Bamfurlong, Greater Manchester Facts for Kids. Kiddle Encyclopedia.