Boskednan stone circle is a partially restored prehistoric stone circle near Boskednan, around 4 miles (6 kilometres) northwest of the town of Penzance in Cornwall, United Kingdom. The megalithic monument is traditionally known as the Nine Maidens or Nine Stones of Boskednan, although the original structure may have contained as many as 22 upright stones around its 69-metre perimeter.

The stone circle is in southwest Cornwall north of the road from Madron to Morvah, and is approximately 1 km northwest of the village of Boskednan and can only be reached on foot. The enigmatic Mên-an-Tol stones (which may also be the remains of a stone circle) are less than 1 kilometre to the southwest.

The stone circle once probably consisted of 22 granite blocks, from which 10 still survive. Six stones stand upright, one sits half a metre out of the ground, the others remain lying in the soil. The stones are all about 1 m high, the highest measure approximately 2 m and stand to northern edge of the circle. The stone circle originally described a circle with a diameter of approximately 22 m. The stone circle may have belonged with the nearby barrow to an extensive cult district. 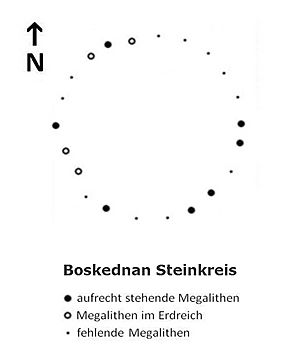 Position of the stones

Stone circles such as that at Boskednan, were erected in the late Neolithic or in the early Bronze Age by representatives of a Megalithic culture. The first mention of the stone circle in modern times, in 1754, is found in the work Antiquities, historical and monumental, of the County of Cornwall by William Borlase, who reported 19 upright standing stones. William Copeland Borlase, a descendant of the earlier Borlase, conducted excavations and found a cist and a funerary urn near the stone circle, dating from the early Bronze Age. Borlase described his discoveries in 1872 in his work Naenia Cornubiae, which concerns prehistoric monuments of Cornwall.

All content from Kiddle encyclopedia articles (including the article images and facts) can be freely used under Attribution-ShareAlike license, unless stated otherwise. Cite this article:
Boskednan stone circle Facts for Kids. Kiddle Encyclopedia.