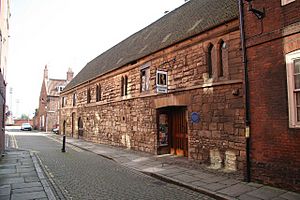 Boston Friary refers to any one of four friaries that existed in Boston, Lincolnshire, England.

52°58′32″N 0°01′22″W﻿ / ﻿52.9756°N 0.0227°W﻿ / 52.9756; -0.0227
The Dominicans were known in medieval England as the Shod Friars or more commonly the Black Friars. The Friary was founded in 1222. In 1288 their buildings, along with a large area of the town, were burnt during St Botolphs Fair, and in 1290 they were given eight oaks from Sherwood Forest by the King. In 1327 they were given a royal licence to build a subterranean aqueduct from Bolingbroke to their house. The friary was forceably closed in 1539 in the Dissolution of the Monasteries, and in 1540 the land confiscated from the friars was granted to the Duke of Suffolk. The refectory of the Dominican friary is the only part of any of the local friaries still in existence. It is Grade II* listed, and houses the Blackfriars Arts Centre.

All content from Kiddle encyclopedia articles (including the article images and facts) can be freely used under Attribution-ShareAlike license, unless stated otherwise. Cite this article:
Boston Friary Facts for Kids. Kiddle Encyclopedia.