Boulevard Brewing Company is a brewery located in Kansas City, Missouri. The Brewers Association currently ranks the American arm of Boulevard's parent company, Duvel Moortgat USA, as the 12th largest craft brewery, and the 18th largest active brewery in the United States based on 2014 sales volume. Before the sale of Anheuser-Busch to InBev in 2008, Boulevard was the largest independent American brewery in the state of Missouri. Boulevard's beers are available in select markets across the United States and Canada.

In 2013, Boulevard was acquired by Duvel Moortgat Brewery. Terms of the deal were not disclosed, but industry publication Beer Business Daily estimated the sale price exceeds $100 million. 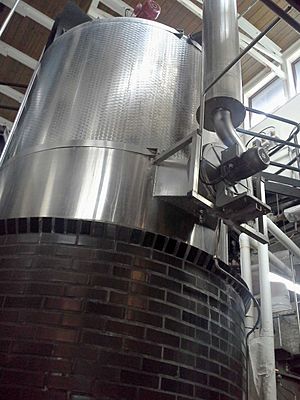 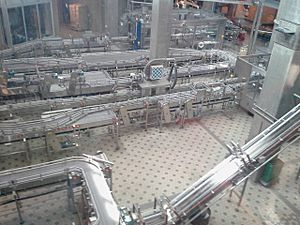 Boulevard Brewery's bottling line is turned off in this photo.

Boulevard began in 1988 when founder John McDonald started construction of the brewery in a turn-of-the-century brick building on Kansas City’s historic Southwest Boulevard. A vintage Bavarian brewhouse was installed with used equipment from a closed brewery in Bavaria, Germany, and the first batches of beer were produced in the fall of 1989. Based on the historic example set by the local and regional breweries that were once common throughout the United States prior to Prohibition, the brewery has a focus on providing locally-brewed beer for the Kansas City region. The brewery's first half-barrel of Boulevard Pale Ale was delivered personally by McDonald in his pickup truck to Ponak's Mexican Kitchen, located nearby. In 1990, Boulevard Wheat was added to the product line. Wheat and Pale Ale remain the company’s strongest sellers.

Introduced in late 2007, the "Smokestack Series" joined Boulevard's family of beers with year-round, seasonal, and limited edition lines of artisanal selections packaged mostly in 750 ml bottles, while some are also available in 12 oz. bottles and on draft. These bold, complex varieties were inspired by Belgian Trappist beer, and share several characteristics including their higher alcohol content. Year-round Smokestack beers include The Calling double ipa, Long Strange Tripel, The Sixth Glass quadrupel, Dark Truth Stout, Tell-Tale Tart a slightly sour ale, and Tank 7, a farmhouse ale. Additional Smokestack beers have been released, including some limited release and some that are available year-round.

In mid-2009, the company introduced Boulevard Pilsner to its core brand family. The brew is a nod to the full-bodied pilsners of Kansas City's historic breweries of the late nineteenth and early twentieth centuries. In the spring of 2013, Boulevard Pilsner was rebranded to KC Pils.

In 2018, Boulevard teamed with Kansas City native and rapper Tech N9ne to create a new beer. The beer, which is named Bou Lou and is a wheat beer with pineapple and coconut flavors, is named for and inspired by his song "Caribou Lou". It was released on June 18 in Kansas City, Wichita, Denver, and Oklahoma City and on July 9 in St. Louis.

With capacity reaching an estimated 600,000 barrels from an expansion project completed in 2006, the brewery is now one of the largest craft brewers in the Midwest. In the U.S., Boulevard Beer is available in 41 states. Internationally, it can be found in Belgium, Brazil, Canada, China, Finland, France, Germany, the Netherlands, Norway, Sweden and the United Kingdom.

In 2013, many of the brewery's beers were certified kosher by the Vaad HaKashruth of Kansas City.

Boulevard underwent expansions in 1999 and 2005. In March 2006, Boulevard broke ground on a $20 million expansion project that increases brewing production capacity by an estimated 60,000 barrels/year. The new brewing and packaging building was constructed adjacent to the existing plant.

Designed by 360 Architecture, the new addition is 68,500 square feet (6,360 m2) and includes a two-story state-of-the-art brewhouse and a kegging/bottling facility with a skylit atrium. The third floor, in addition to housing Boulevard Brewery offices, has two large hospitality rooms, with a terrace overlooking downtown Kansas City. A glass skywalk links both pedestrian circulation and beer piping between the old and new brewhouses.

Boulevard offers daily tours where visitors may sample their brews.

All content from Kiddle encyclopedia articles (including the article images and facts) can be freely used under Attribution-ShareAlike license, unless stated otherwise. Cite this article:
Boulevard Brewing Company Facts for Kids. Kiddle Encyclopedia.