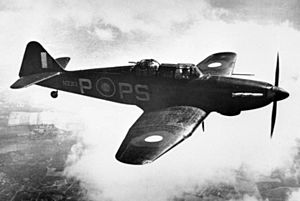 The Boulton Paul Defiant was a British fighter aircraft. This single-engine, aircraft first in August 1937 and was used by the British Royal Air Force in World War II.

Defiants were different to other fighter planes because their guns (four Machine guns) were in a rotating turret and could fire in any direction. They had two crew: one man was the pilot and the other aimed the guns.

After the Battle of Britain, the British only flew Defiants at night. In this way they could attack the German bombers that also flew at night, and avoid the German fighters because they only flew during the day.

Today, only one Defiant is left in the world; it is in a museum in London.

All content from Kiddle encyclopedia articles (including the article images and facts) can be freely used under Attribution-ShareAlike license, unless stated otherwise. Cite this article:
Boulton Paul Defiant Facts for Kids. Kiddle Encyclopedia.