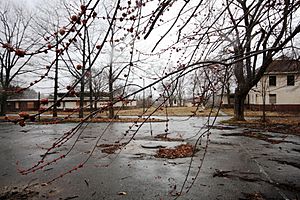 The Bowmanville POW camp also known as Camp 30 was a Canadian-run POW camp for German soldiers during World War II located in the community of Bowmanville, Ontario in Clarington, Ontario, Canada (2020 Lambs Road). In September 2013, the camp was designated a National Historic Site of Canada.

In 1943, prisoners Otto Kretschmer and Wolfgang Heyda were the subject of an elaborate escape attempt named Operation Kiebitz.

(Bowmanville Boys Training School). Two of the early buildings were completed in 1927. The property taught boys until 1941, 14 years after it first opened as a school, when the government told the school to move to a new location so the area could be quickly turned into a prisoner of war (P.O.W) camp. Bowmanville Boys Training School were relocated within Bowmanville to "Rathskamoray" (Currently the Lion's Centre), although most boys returned home.

Canadian officials had barely seven months to turn the boys school into a prisoner-of-war (POW) camp. The school was built to hold many people, but the officials had many tasks to complete before prisoners could be moved in: building barb-wire fences 15 feet apart, guard towers (nine), as well as gates and barracks for the Canadian guards. These tasks were completed in late 1941, just as the prisoners were arriving.

After the war ended, the POWs were shipped back to Europe, and the site resumed its use as a school. 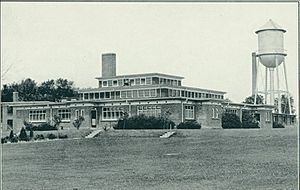 Cafeteria and site of "Battle of Bowmanville", c. 1930

In October 1942, between 1,500 and 4,000 prisoners revolted against the POW guards after they were shackled as retribution as part of the escalation of Germany's new Commando Order.

Lieutenant-colonel James Taylor had asked German senior officer Georg Friemel to supply 100 prisoners to volunteer to be shackled as part of the ongoing international dispute. When he refused, Otto Kretschmer and Hans Hefele were also asked to provide volunteers, but refused.

Taylor ordered the guards to find 100 officers to be shackled by force, and Horst Elfe, Kretschmer and others barricaded themselves in the mess hall, arming themselves with sticks, iron bars and other makeshift weapons. Approximately 100 Canadian soldiers requisitioned from another base in Kingston arrived, and together stormed the mess hall using only ice hockey sticks, so the two sides remained evenly matched. After several hours of brawling, the Canadians brought high pressure water hoses and soaked the cabin thoroughly until the prisoners agreed to come out peacefully.

During later incidents in the battle which spanned several days, Volkmar König was wounded by gunfire and another prisoner was bayoneted, and a Canadian soldier suffered a skull fracture from a thrown jar of jam. After calm had returned, 126 of the prisoners were transferred to other camps.

During the years the site was used as a prisoner of war camp, there were many escape attempts; even though it was said the prisoners were treated better than most citizens of Bowmanville and the surrounding area.

The property remained as a boys training school until 1979 and various academic used until 2008 (school for overseas Malaysian students, St. Stephen's Catholic Secondary School and finally a private Islamic university).

In present times, the P.O.W. Camp 30 is greatly neglected. Buildings are boarded up, doors are blocked by dirt, or are also boarded up. All windows are broken, and interiors of the buildings are badly damaged with graffiti covering the walls, and drywall smashed. Most are also considered dangerous or a fire hazard (there is fire damage within all of the biggest buildings), but some remain in fairly good condition, with minimal water damage.

In 2013, Camp 30 received a spot on Heritage Canada's list for 'The top 10 endangered places of 2013' mainly because it was scheduled to be demolished, due to neglect of the buildings, and the value of the land to a developer. This demolition plan was cancelled later in 2013, after it was named a National Historic Site. Most agree that the site should be saved, but at the moment it is undecided what will be done with the property. "All we want to see is reuse of the buildings... some people want a big, beautiful museum, we understand the finances aren't there. We just want to see adaptive reuse" the president of ACO Clarington, Tracey Ali, said to the Clarington newspaper. The estimated amount to restore all buildings could go as high as $15,000,000.

The Clarington paper also reports of how a committee was created September 9, 2013 to look at how the buildings can be saved, and how they will be preserved. A heritage plaque is expected to be put up, given its landmark designation.

The site is currently in poor condition, vandalized, abandoned and neglected.

Today the cafeteria is little more than a brick shell, although the building's original freezer remains intact. Also, the basement has the remains of two boilers.

On July 5, 2016, the Municipality of Clarington announced that they had completed a purchase agreement with the current owners of the property, Kaitlin Developments and Fandor Homes.

This move has effectively saved the site from eventual destruction by a combination of vandalism, inadequate funding, and eventual home development. The sale includes a $500,000 donation to the Municipality to assist in the maintenance and care of the property in conjunction with an initial site cleanup. The cleanup will involve destroying buildings that have not received a historical status, cleaning up graffiti, and the installation of security cameras.

As of 2021, the site remains in disrepair with no cleanup efforts initiated.

All content from Kiddle encyclopedia articles (including the article images and facts) can be freely used under Attribution-ShareAlike license, unless stated otherwise. Cite this article:
Bowmanville POW camp Facts for Kids. Kiddle Encyclopedia.