Kids Encyclopedia Facts
Not to be confused with Cowthorpe Oak. 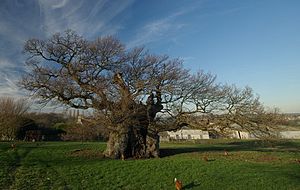 Bowthorpe Oak in Manthorpe near Bourne, Lincolnshire, England is perhaps England's oldest oak tree with an estimated age of over 1,000 years. The tree has a girth of 12.30 metres (40 feet 4 inches).

The Bowthorpe Oak can be found on Bowthorpe Park Farm and visitors are welcome throughout the year. The hollow interior had been fitted with seats and has apparently been used as a dining room for 20 people in the past. It was selected as one of 50 Great British Trees selected by The Tree Council in 2002 to spotlight trees in Great Britain in honour of the Queen's Golden Jubilee. The Bowthorpe Oak is featured in The Guinness Book of Records and was filmed for a short TV documentary about its size. It also appeared in the documentary Oak Tree: Nature's Greatest Survivor, hosted by George McGavin about the life of oak trees. It was a filming location for the film Hollow (2011), directed by Michael Axelgaard.

All content from Kiddle encyclopedia articles (including the article images and facts) can be freely used under Attribution-ShareAlike license, unless stated otherwise. Cite this article:
Bowthorpe Oak Facts for Kids. Kiddle Encyclopedia.