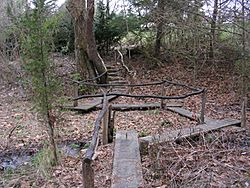 A zig-zag bridge at Boxerwood

Boxerwood Nature Center and Woodland Garden is a 15-acre (6.1 ha) arboretum featuring both native and unusual plant specimens, located within a larger preserve at 963 Ross Road near Lexington in Rockbridge County, Virginia, United States in the Shenandoah Valley. Established as a private garden in 1952, it was listed on the National Register of Historic Places in 2015.

Boxerwood Nature Center has a PlayTrail, a nature playground designed especially for young children. Kids can run through the plant tunnels, float leaves down the mini creek, make pies in the mud kitchen, climb tiny house mountain and more. The rules include "make noise," "touch anything," "get dirty," and "have fun". There is also a Fairy Forest where children can build their own fairy structures, and a wetland walk where visitors can cross the zigzag bridge over the garden wetlands. In fall 2016, a pollinator garden was added to the gardens.

All content from Kiddle encyclopedia articles (including the article images and facts) can be freely used under Attribution-ShareAlike license, unless stated otherwise. Cite this article:
Boxerwood Gardens Facts for Kids. Kiddle Encyclopedia.