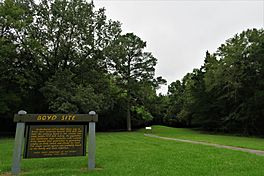 The Boyd Mounds Site (22MD512) is an archaeological site from the Late Woodland and Early Mississippian period located in Madison County, Mississippi near Ridgeland. Many of the mounds were excavated by The National Park Service in 1964. It is located at mile 106.9 on the old Natchez Trace, now the Natchez Trace Parkway. It was added to the NRHP on July 14, 1989 as NRIS number 89000784.

The site consists of six burial mounds dating to the Late Woodland and Early Mississippian period. Of the six mounds at the site, Mound 2 is situated next to a parking area off the Natchez Trace Parkway and is accessible to visitors. Mound 2 is 110 feet (34 m) by 60 feet (18 m) and 4 feet (1.2 m) in height. Excavations done by the National Park Service in the early 1960s showed that the mound was initially two mounds that were constructed side by side but were later joined together whan a new layer of earth was added to create a single oblong mound. Excavators also found the remains of forty one individuals, and an array of artifacts such as pottery in the mound.

All content from Kiddle encyclopedia articles (including the article images and facts) can be freely used under Attribution-ShareAlike license, unless stated otherwise. Cite this article:
Boyd Mounds Site Facts for Kids. Kiddle Encyclopedia.