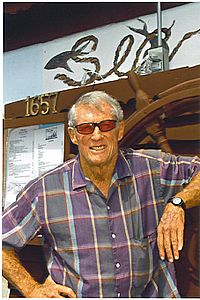 Bradford "Brad" Harris (July 16, 1933 – November 7, 2017) was an American actor, stuntman, bodybuilder and executive producer. He was born in St. Anthony, Idaho. He appeared in 50 movies during his career. He was best known for his roles in Kommissar X, Goliath Against the Giants and in The Pirates of the Mississippi.

All content from Kiddle encyclopedia articles (including the article images and facts) can be freely used under Attribution-ShareAlike license, unless stated otherwise. Cite this article:
Brad Harris Facts for Kids. Kiddle Encyclopedia.