Bragg's Mill was built in 1757 by William Haylock, a carpenter of Ashdon. In 1813, the mill was advertised for sale, then having two pairs of millstones. At this time it was still an open trestle mill. The mill was extended at the tail c1815. A roundhouse was added circa 1820. The mill was working until c1912. By 1932 the mill was being propped up from beneath, as the side girt on the left side had failed. The mill was renovated in the late 1950s, but was derelict again by 1974, when further repairs were carried out. The sails were removed in the 1990s.

A meeting of the villagers in April 1999 agreed that the windmill should be restored and that included the sails being fitted. The Ashdon Windmill Trust Ltd was formed and registered as a charity. Planning permission and listed building permission were obtained. In 2000, the mill was gifted to Ashdon village by the Thurlow Estate, who owned it, with the promise of a £25,000 donation once the Trust had raised £25,000 itself. The Essex Environment Trust gave a grant of £40,000 in 2001. Restoration of the mill started in March 2002. Vincent Pargeter was engaged to do the restoration. The frame of the mill was straightened, and the mill completely reclad in new weatherboards. By 2004 the mill was resplendent in a new coat of white paint. In July 2004, a grant of £46,900 was received from the Heritage Lottery Fund. New sails were fitted on 5 July 2006.

Bragg's Mill is a post mill with a single storey roundhouse. It has four patent sails carried on a wooden windshaft with a cast iron poll end. Two sails are double shuttered and two are single shuttered. Two pairs of millstones are driven, arranged Head and Tail. The mill is winded by tailpole. The mill is 34 ft (10.36 m) high to the roof. 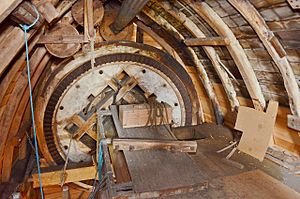 The windshaft is of wood with a cast iron poll end, probably fitted at the same time that the Patent sails were added. The mill would originally have been built with common sails.

Bragg's Mill in its last working years was described in the book Five Miles from Bunkum.

The mill is open to the public on the second Sunday of each month, starting in April each year.

All content from Kiddle encyclopedia articles (including the article images and facts) can be freely used under Attribution-ShareAlike license, unless stated otherwise. Cite this article:
Bragg's Mill, Ashdon Facts for Kids. Kiddle Encyclopedia.