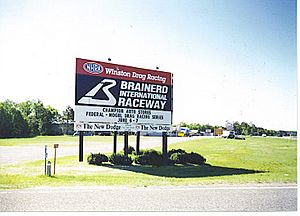 Brainerd International Raceway is a road course, and dragstrip racing complex northwest of the city of Brainerd, Minnesota. The complex has a 0.25-mile (0.402 km) dragstrip, and overlapping 2.5-mile (4.023 km) and 3.1-mile (4.989 km) road courses. The complex also includes a kart track. The raceway hosts the National Hot Rod Association's Lucas Oil Nationals. It is a popular racetrack for the Trans Am Series. The spectator seating capacity of the circuit is 20,000.

Opened in July 1968 as Donnybrooke Speedway, there were no safety barriers, run-out areas, grandstands or even restrooms. George Montgomery and Bud Stall cleared the racetrack through a wooded area on the south side of North Long Lake. It was SCCA's first venue in the region. It was also an NHRA-sanctioned track, with the first official event there an NHRA race, at the opening; Top Fuel Dragster was won by Doc Halladay. With the help of St Paul sports promoter Dennis Scanlan, it hosted a 2-heat USAC Indy Car race in 1969. The heats were won by Gordon Johncock and Dan Gurney.

In 1973 Jerry Hansen bought the track and renamed it Brainerd International Raceway. It played host to CanAm races in 1970, 1971, and 1972. These races were won by, respectively, Denny Hulme, Peter Revson, and François Cevert.

In the summer of 2006, Jed and Kristi Copham of Forest Lake, Minnesota, became the new owners of Brainerd International Raceway.

Brainerd International Raceway was damaged during a severe thunderstorm that struck portions of Minnesota on July 12, 2015.

Brainerd International Raceway maintains the original name of the now 50-year-old course. The course is used for automotive and motorcycle racing.

The 3.1-mile Donnybrooke Road Course has 10 turns and is considered wide – the main straight is 60 feet wide. There is essentially no elevation change. BIR is a high-speed course; vehicles can reach speeds of nearly 180 mph and take the slowest corners around 80 mph. There are wide runoff areas at most of the corners, which makes BIR's road course extremely safe. This configuration uses the dragstrip as part of the course.

The 2009 racing season was the first for the 2.5 mile course which was completed the previous summer.

Turn 1 on the 2.5-mile Competition Road Course is the same as Turn 1 on the three-mile road course. Turn 1 is a narrow but very high-speed banked right-hand 60-degree turn, which is intended be taken flat out by all vehicles. Turns 1 through 8 of the original 3.1-mile road course are used for the new circuit. At Turn 8, a 240-degree right-hand Clover Leaf transitions drivers from the old course to the new stretch of asphalt that winds its way back across the infield, eventually tying back into the original circuit just before Turn 1, avoiding the dragstrip. In all, the Competition Road Course features 13 turns and very little elevation change.

The dragstrip dates back to 1969, when BIR converted the mile-long straightaway on its road course to a drag strip and hosted an NHRA Divisional Points Race. In 1977, BIR hosted the Crown Auto Funny Car Championships and the Crown Auto Winston Points Championship. It was reconstructed in 2005, adding a 700-foot concrete launch pad and new asphalt for the remaining 600 feet was installed. Tony Schumacher, set the world record for top fuel dragsters with a 337.58 mph (543.28 km/h) run in 2005. This speed and time are recorded at the end of a standing start quarter mile acceleration race, before the NHRA shortened top fuel and funny car races to the current 1,000 ft (304.8 m) since 2008.

All content from Kiddle encyclopedia articles (including the article images and facts) can be freely used under Attribution-ShareAlike license, unless stated otherwise. Cite this article:
Brainerd International Raceway Facts for Kids. Kiddle Encyclopedia.