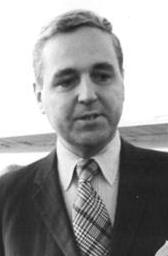 Brandon Hambright Grove, Jr. (April 8, 1929 – May 20, 2016) was an American diplomat. He was born in Chicago. He was the United States Ambassador to the German Democratic Republic (East Germany) from 1974 through 1977 and Zaire from 1984 through 1987. He served on the board of directors of the American Academy of Diplomacy.

All content from Kiddle encyclopedia articles (including the article images and facts) can be freely used under Attribution-ShareAlike license, unless stated otherwise. Cite this article:
Brandon Grove, Jr. Facts for Kids. Kiddle Encyclopedia.