Brasserie Montmartre was a French, and later Mediterranean, restaurant and jazz club in Portland, Oregon, in the United States. 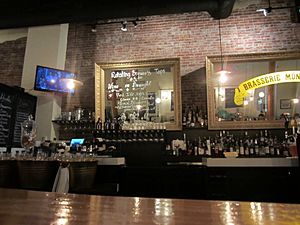 Brasserie Montmartre was a restaurant and jazz club that operated three different times in Portland, Oregon. The original restaurant, which featured French cuisine, opened in 1978 and was described by The Oregonian as having "customer-drawn crayon art on the walls, black-and-white checkered floors, nightly jazz and a solid food menu". It closed in 2006.

New owners Matt and Sara Maletis, who were longtime Portland residents, re-opened the French restaurant in 2009. The couple signed a twenty-year lease and spent nearly $1 million renovating its interior. However, Brasserie was closed a year and a half later, in 2011.

Carl Coffman, the building owner, and chefs Pascal Chureau and Michael Hanaghan re-opened the restaurant for a third time in May 2012. Coffman and Chureau had purchased the restaurant in the spring of 2011. According to The Oregonian, the most recent iteration of Brasserie served "accessible French food with a relaxed vibe". In 2012, Chureau sold his share of the business and the restaurant's menu began offering more Mediterranean cuisine options. It closed for the third time on April 30, 2015.

All content from Kiddle encyclopedia articles (including the article images and facts) can be freely used under Attribution-ShareAlike license, unless stated otherwise. Cite this article:
Brasserie Montmartre Facts for Kids. Kiddle Encyclopedia.