The Brattonsville Historic District is a historic district and unincorporated community in York County, South Carolina. It includes three homes built between 1776 and 1855 by the Brattons, a prominent family of York County. It was named to the National Register of Historic Places in 1971.

The Revolutionary House, built in 1776 by Colonel William Bratton (who fought in the Revolutionary War), was originally a one-room log house with a small porch. Later additions were added to the original structure, and clapboard siding was placed over the original logs. 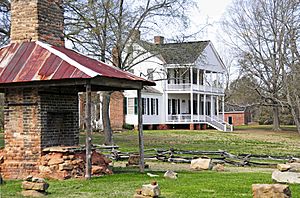 The Homestead, Brattonsville's second house built about 1830 as the home of Dr. John S. Bratton, was significant as the center of an 8500-acre plantation. This 12-room, 2⅛-story antebellum mansion is an example of Greek Revival residential architecture. The interior features Adam mantels, exquisite dadoes, and a carved staircase.

The Brick House, built in 1855, has a two-story brick façade with end chimneys, a two-tiered portico, stucco-over-brick columns, and a two-story wooden wing at back; it was originally a private boarding school for girls.

The district was listed on the National Register of Historic Places on August 19, 1971. In 1997, the district's boundary was increased to comprise 6760 acres, 24 buildings, 12 structures, and 1 object.

Historic Brattonsville is the 775-acre (314 ha) portion of the Brattonsville Historic District that is owned by the York County Culture and Heritage Commission and Dr. Rufus Bratton, and operates as an open-air museum. Buildings include Hightower Hall, The Homestead and the McConnell House (moved to the site in 1983).

All content from Kiddle encyclopedia articles (including the article images and facts) can be freely used under Attribution-ShareAlike license, unless stated otherwise. Cite this article:
Brattonsville Historic District Facts for Kids. Kiddle Encyclopedia.