Kids Encyclopedia Facts
This page is about the steam museum and gardens in Norfolk. For the Norfolk village, see Bressingham.

The carousel at Bressingham

Bressingham Steam & Gardens is a steam museum and gardens located at Bressingham (adjacent to a garden centre), west of Diss in Norfolk, England. The site has several narrow gauge rail lines and a number of types of steam engines and vehicles in its collection and is also the home of the national Dad's Army exhibition. 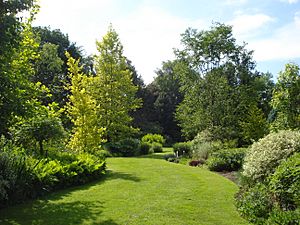 A view of a part of the gardens at Bressingham

The gardens were established by Alan Bloom MBE at Bressingham Hall. He moved to Bressingham in 1946, after selling his previous 36-acre (15 ha) site at Oakington in Cambridgeshire to raise the capital for the 220 acres (89 ha) in Norfolk, where he hoped to be both a farmer and a nurseryman. He was a plant expert of international renown, particularly in the field of hardy perennials. He laid out the Dell Garden at Bressingham, with its well-known island beds. His son, Adrian Bloom, laid out the Foggy Bottom Garden.

Much of the site is given over to commercial horticulture. There is a garden centre on the site, trading as Blooms of Bressingham, although the nurseries themselves are not open to the public. Bressingham Gardens and Steam Museum is an independent charitable trust. Alan Bloom had wanted to create his own trust in 1967, to ensure that the collection would not be dispersed to pay for death duties, but the laws of the time made this difficult, and after five years of negotiation, the museum was nearly handed over to the Transport Trust. However, the legislation governing private museums was relaxed just before the handover in 1971, and Bloom was able to create his own Trust and thus retain control of it because the collection was of historical and educational importance.

There are three railway lines which take visitors around the gardens:

This 10 1⁄4 in (260 mm) gauge miniature railway runs through the Dell Garden, giving passengers clear views of the beds. The journey begins in a terminus station within the museum grounds before heading into the Dell Garden. At the far end of the garden, the train is turned in a balloon loop, before returning to the station. A turntable is located at the end of the platform road to facilitate the turning of the locomotive with minimal movements required. The points located at the balloon loop and the entrance to the platform road are spring operated so there is no requirement for a signalman. The coloured light aspect signal protecting the platform is interlocked with the lie of the points being set for the platform road and the turntable also being set to the platform road. The railway's passenger trains are operated by steam locomotive Alan Bloom, which was constructed along with the railway in 1995. The design of Alan Bloom was inspired by the design of Large Quarry Hunslet George Sholto, which operates on Bressingham's Fen Railway.

This is a 2 ft (610 mm) narrow gauge railway. The Fen Railway (Formerly the Nursery Railway) was the second railway to be completed at Bressingham, first opening in 1966. The railway is 2.5 miles in length and crosses the Waveney Valley Railway, running parallel to it for a short distance. It also runs through meadows and passes the now-defunct plant nurseries. The Railway was extended twice following initial completion to become the length it is today. 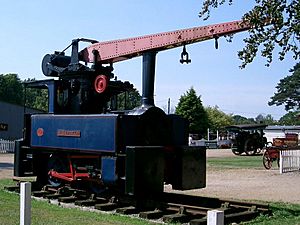 A variety of steam vehicles are in the collection.

Steam Engines Portable and others

The museum is the home of the national Dad's Army collection of vintage vehicles. These are located on a reconstruction of the High Street in the fictional Walmington-on-Sea beside the butcher's shop of Lance-Corporal Jones, Private Frazer's undertaker's shop and Captain Mainwaring's bank office.

The vehicles include Jones' van and the dust cart from the 1971 film, Mainwaring's Austin 8 staff car used in the episode The Making of Private Pike, the vintage fire engine used in Brain Versus Brawn and the steamroller 'Boxer' and traction engine 'Bertha' which appeared in other episodes.

All content from Kiddle encyclopedia articles (including the article images and facts) can be freely used under Attribution-ShareAlike license, unless stated otherwise. Cite this article:
Bressingham Steam and Gardens Facts for Kids. Kiddle Encyclopedia.