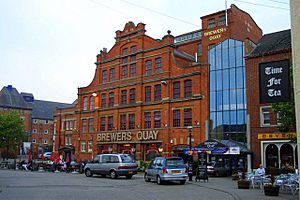 Brewers Quay shopping and heritage centre on Hope Square near the Weymouth harbourside in 2007.

Brewers Quay is a converted Victorian brewery on the south side of Hope Square near the Old Harbour in Weymouth, Dorset, southern England. Much of the complex dates from 1903–04, when it was built as the Hope Brewery for John Groves & Sons Ltd. It was later taken over by Devenish Brewery in 1960 and opened in 1990 as an indoor shopping complex with around twenty specialty shops together with heritage and science exhibits, until it closed in 2010. From 2013-17, the building housed an antiques emporium. It currently awaits redevelopment.

Brewers Quay has been a Grade II listed building since 1974. The building is located at Hope Square, which holds a range of cafes, bars, bistros, while close by is the Tudor House Museum, and facing out to sea is Nothe Fort and its gardens.

Brewery and conversion into tourist attraction 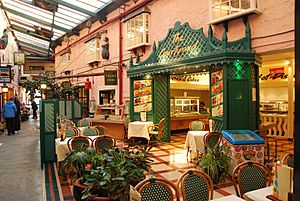 The Courtyard Restaurant of Brewers Quay.

Hope Square had been used for brewing since at least 1252. There was good access to spring water from Chapelhay, while barley fields were located at Radipole. By the 18th century, there were three separate breweries in the area; each being under the ownership of the Flew family, William Devenish and the Davis Brewery. In the early 19th century, the Flew family sold their brewery to Devenish, and in 1960, Groves also sold theirs to Devenish. Devenish continued to produce beer from Brewers Quay until 1985.

Following its closure, Devenish and Weymouth & Portland Borough Council launched a major plan to transform the now-vacant building into a shopping centre with a pub and restaurant. Devenish spent £4.5 million on refurbishing the building. Opened in June 1990, the new complex was hailed as "the Covent Garden of Dorset". The success of Brewers Quay resulted in various awards and commendations, including the Come to Britain Trophy, a Commitment to the Environment Award, a Civic Society award and major commendation from Business and Industry. 100,000 people visited the building in 1990, with the number increasing to 750,000 in 2010. The building also housed the award-winning Timewalk exhibition and Weymouth Museum, and in 1992, a hands-on science centre named Discovery was opened.

All content from Kiddle encyclopedia articles (including the article images and facts) can be freely used under Attribution-ShareAlike license, unless stated otherwise. Cite this article:
Brewers Quay Facts for Kids. Kiddle Encyclopedia.