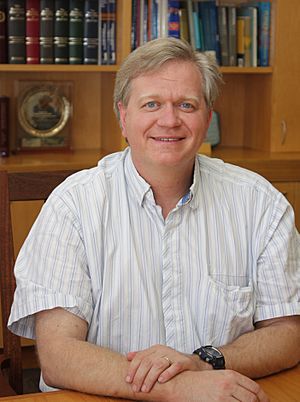 Brian P. Schmidt (born February 24, 1967) is a Distinguished Professor, Australian Research Council Laureate Fellow and astrophysicist at the Australian National University Mount Stromlo Observatory and Research School of Astronomy and Astrophysics. He is widely known for his research in using supernovae as Cosmological Probes. He currently holds an Australia Research Council Federation Fellowship. Schmidt shared both the 2006 Shaw Prize in Astronomy and the 2011 Nobel Prize in Physics with Saul Perlmutter and Adam Riess for providing evidence that the expansion of the universe is accelerating.

Schmidt, an only child, was born February 24, 1967 in the Montana mountains. His father, Dana C. Schmidt, was a fisheries biologist. When he was 13, his family moved to Anchorage, Alaska.

Schmidt went to Bartlett High School in Anchorage, and graduated in 1985. He has said that he wanted to be a meteorologist "since I was about five-years-old" but "... I did some work at the US National Weather Service up in Anchorage and didn't enjoy it very much. It was less scientific, not as exciting as I thought it would be - there was a lot of routine. But I guess I was just a little naive about what being a meteorologist meant." He decided to study astronomy just before he started at university. He was graduated BS(Physics), BS(Astronomy) from the University of Arizona in 1989. He received his MA (1992) and then PhD from Harvard University in 1993. Schmidt's PhD thesis was supervised by Robert Kirshner and used Type II Supernovae to measure the Hubble Constant.

At Harvard, he met his future wife, an Australian, Jenny Gordon who was studying for a PhD in economics. In 1994, he moved to Australia.

Schmidt was a Postdoctoral Fellow at the Harvard-Smithsonian Center for Astrophysics (1993-94) before moving to Mount Stromlo Observatory in the Australian Capital Territory in 1995.

Schmidt and Adam Riess led the High-z Supernova Search Team which found evidence that the Universe's expansion rate is now accelerating. They discovered this by looking at Type 1a Supernova. The discovery was the opposite of the current theory that the expansion of the universe was slowing down. By studying the color shifts in the light from the supernova from Earth, they discovered that these billion-year old nova were still accelerating. This result was also found about the same time by the Supernova Cosmology Project, led by Saul Perlmutter. With two studies getting the same result scientists now accept the accelerating universe theory. New research is now trying to understand the nature of the universe, such as the existence of dark matter. The discovery of the accelerating universe was named 'Breakthrough of the Year' by Science Magazine in 1998. Schmidt was jointly awarded the 2011 Nobel Prize in Physics along with Reiss and Perlmutter for their groundbreaking work. 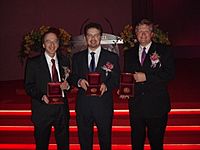 Saul Perlmutter, Riess, and Brian P. Schmidt being awarded the 2006 Shaw Prize in Astronomy. The trio would later be awarded the 2011 Nobel Prize in Physics.

Schmidt has received the Australian Governments Malcolm McIntosh Prize in 2000, Harvard University's Bok Prize in 2000, the Australian Academy of Science's Pawsey Medal Medal in 2001, and the Vainu Bappu Medal of the Astronomical Society of India in 2002. He was the Marc Aaronson Memorial Lecturer in 2005, and in 2006, he shared the Shaw Prize in Astronomy with Adam Riess and Saul Perlmutter.

Schmidt, along with Riess and Perlmutter, jointly won the 2011 Nobel Prize in Physics for their observations which led to the discovery of the accelerating Universe.

All content from Kiddle encyclopedia articles (including the article images and facts) can be freely used under Attribution-ShareAlike license, unless stated otherwise. Cite this article:
Brian Schmidt Facts for Kids. Kiddle Encyclopedia.