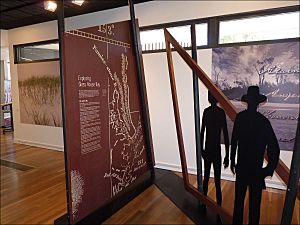 View of the Bribie Island Seaside Museum's permanent display "More than a skirmish" documenting the arrival of Matthew Flinders and Bongaree on Bribie Island.

The purpose-built museum has a contemporary design, naturally lit interiors, polished hardwood floors, dark ceilings and a facade of timber slats with views to the landscape and beach beyond. A micro-cinema seats around 10 with another 5 standing. The main reception area houses the museum shop. There is a purpose-built ventilated display case to house preserved fish specimens dating from 1904.

The museum opened with three permanent displays, the Matthew Flinders 1799 expedition, the life and art of Ian Fairweather, and the story of Bribie Fish and Fishing featuring the early 1900s fish collection of the Amateur Fishermen's Association of Queensland Inc. The collection was started by J Douglas Ogilby, a world-class ichthyologist. At the time of the opening a travelling exhibition on beach culture occupied the touring exhibition space.

The Queensland government contributed $1 million to the construction of the museum through its Q150 Legacy Infrastructure program.

During her visit in August 2010, Queensland Local Government Minister Desley Boyle suggested Bribie Island was arguably the birthplace of Queensland's tourism industry, referring to the steam ship Koopa's regular run to the island carrying 800 passengers. She recounted that during the War Bribie Island was under United States control and was referred to as Fortress Bribie and that artist Ian Fairweather spent many years living in a basic shack on the island.

All content from Kiddle encyclopedia articles (including the article images and facts) can be freely used under Attribution-ShareAlike license, unless stated otherwise. Cite this article:
Bribie Island Seaside Museum Facts for Kids. Kiddle Encyclopedia.