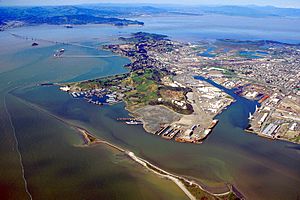 An aerial view of western Richmond, Brickyard Cove to the left of the green hill with the marina.

Brickyard Cove is an upscale waterfront neighborhood in Richmond, California. The neighborhood is surrounded by the bluffs of Miller/Knox Regional Shoreline and beach park. It is adjacent to Point Richmond. The area is subdivided into three main living areas, mostly condominiums terraced into the hills, private houses on stilts along the spits, and brand new luxury tract homes. The area includes the Richmond Yacht Club and Brickyard Cove Marina. The area is home to a fishing pier at Ferry Point, which takes its name from the fact that it used to be the car ferry connecting to San Francisco. Passengers ending their journeys on the transcontinental railroad, which terminated in Richmond at Ferry Point, could take a car ferry to San Francisco. One such ferry was called the U.S.S. San Pablo, after the bay. There is also a beach, Keller Beach, popular with locals. The neighborhood is also home to the Golden State Model Railroad Museum, one of the largest model railroad exhibits in the world. Brickyard Cove had AC Transit bus service (line 79) until budget cuts in the early 1990s when a salestax was not renewed.

All content from Kiddle encyclopedia articles (including the article images and facts) can be freely used under Attribution-ShareAlike license, unless stated otherwise. Cite this article:
Brickyard Cove, Richmond, California Facts for Kids. Kiddle Encyclopedia.