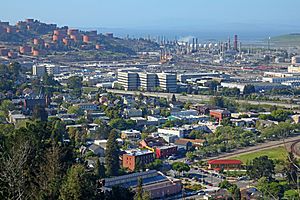 Point Richmond, also sometimes referred to locally as The Point, is a neighborhood in Richmond, California, United States, near the eastern end of the Richmond-San Rafael Bridge, between Interstate 580 and the San Francisco Bay. Its compact size and many historic buildings give it a quaint "small town" feel that has also been described as "highbrow".

Originally a tiny village known as East Yards surrounded by abandoned farm lands, Point Richmond was Richmond's central downtown area from the late 19th century until the early 20th century, when the present downtown superseded it as the busiest part of town. Since then, its trademark "mom-and-pop" shops have survived. The Point Richmond Historic District has been listed on the National Register of Historic Places since 1978.

The neighborhood is dominated to the north by several industrial operations, including a large Chevron refinery, several smaller chemical manufacturing facilities and an active Burlington Northern Santa Fe freight yard. Long distance freight trains are put together in this yard, largely consisting of container cars and automobile transports loaded from the nearby Port of Richmond. The 24-hour operations of the switch engines are a constant feature of life in the Point. Residents have a love-hate relationship with the trains, pushing the railroad to modify operations to make them quieter and less disruptive to traffic but also fighting to save the wig wag signals when BNSF made plans to remove them. The wig wag signals, while no longer operating (newer gates, red lights and bells have been installed at the crossing), are one of only a handful still in existence nationwide.

The neighborhood is divided by a ridge, which separates it into a "Bay side" and a "town side." Many houses, which include historic Victorians, offer a view of the bay. Many of the area businesses are housed in century-old buildings dating back to before the founding or incorporation of the town. Partnerships of which prominent locals Josh Genser and Tom Butt are principals are the largest property owners in the area.

The Plunge is a local landmark swim center, reopened in August 2010 after a seismic upgrade and remodeling. The nearby hill is Nicholl Knob, which is part of the Miller/Knox Regional Shoreline. In the historic downtown section there is the Point Richmond History Association museum, a small museum of photos and artifacts that are dedicated to local history. There is a tunnel through this hill named the Ferry Point tunnel, since trains used to drop passengers off here to continue on to San Francisco by ferry. Part of the area on the bay side of the tunnel is known as Brickyard Cove owing to the brickyard which used to operate in the area. Point Richmond is home to Keller Beach, one of the several publicly accessible beaches in Richmond, and nearby is a picnic area and parking lot. Across from the picnic area is the Golden State Model Railroad Museum. Continuing along the road is Brickyard Cove a housing development in the area of a former brickyard. Nearby, at the end of Dornan Drive is the S.S. Red Oak Victory ship in former World War II Kaiser Shipyard 3, which is part of the Rosie the Riveter/World War II Home Front National Historical Park; it is a restored Victory ship built in the city during World War II.

Further along lies Brickyard Cove and the Richmond Yacht Club, one of many marinas in the city. There are condominiums and brand new luxury tract homes terraced into the hills as well as homes built over the water on piles along two spits.

Point Richmond's shoreline was the location of a 20-foot (6.1 m) beached grey whale calf in May 2007, the source of considerable odor in the area. After a delay in obtaining permits and disputes over who would pay, the carcass was towed out to sea.

One of the last remaining portions of the channel and marshlands that once separated the island of Point Richmond with the mainland is the Herman Slough Creek in the north end of the neighborhood along with the Santa Rita Channel where the marinas are now located.

It is served by AC Transit line 72M, which terminates in Point Richmond, and by Golden Gate Transit's commuter route 42 and express route 40 to San Rafael Transit Center in Marin County. There was previously shuttle service on line 374 to the Richmond Ferry Terminal until it ceased operations in 2001. In addition to express transbay bus service to the San Francisco Transbay Terminal along route LD, there was also service directly to El Cerrito del Norte BART from Point Richmond and Brickyard Cove on line 79, but these routes were removed due to funding cuts.

All content from Kiddle encyclopedia articles (including the article images and facts) can be freely used under Attribution-ShareAlike license, unless stated otherwise. Cite this article:
Point Richmond, Richmond, California Facts for Kids. Kiddle Encyclopedia.