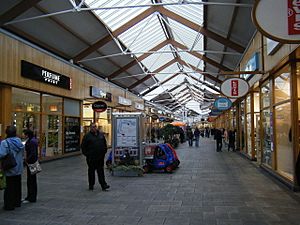 The development is situated on Junction 36 of the M4 motorway between Cardiff and Swansea. It consists of around ninety different stores which offer discounts off brand and designer labels. An array of goods are available including clothes, toys, books and electrical products.

The Designer Outlet is located near the villages of Sarn, Litchard and Pen-y-fai and the town of Bridgend. Adjacent to the development are a Sainsbury's supermarket, a Harvester restaurant, a Premier Inn hotel, a Joules clothing store and a KFC restaurant which was previously located in the food court until 2012.

It is also served by a number of bus routes to destinations both north and south of the village to and from the town of Bridgend and the Llynfi, Garw and Ogmore Valleys and has a bus stop which is served by National Express and TrawsCambria coaches between Swansea and Cardiff.

All content from Kiddle encyclopedia articles (including the article images and facts) can be freely used under Attribution-ShareAlike license, unless stated otherwise. Cite this article:
Bridgend Designer Outlet Facts for Kids. Kiddle Encyclopedia.