The Speaker and the Serjeant-at-Arms are amongst those responsible for the legislative precinct, which by statute include the Parliament Buildings and grounds.

The Neo-baroque buildings face north on Belleville Street facing the Inner Harbour and diagonally across from The Empress Hotel. A statue of Queen Victoria stands on the front lawn as well the British Columbia Legislature Cenotaph commemorating the province's World War I, World War II, Korean War and Afghanistan War dead. Atop the central dome is a gold-covered statue of Captain George Vancouver. Free guided tours of the facility are offered year-round.

From 1856 to 1860 the Legislature of the Colony of Vancouver Island met at Bachelor's Hall at Fort Victoria. From 1860 to 1898 it was housed in the first permanent building at Legislative Hall or Legislative Council Court, a two-storey wooden building along with four other buildings (Land Office, Colonial Office, Supreme Court, and Treasury) known colloquially as "The Birdcages" because of their shape (burned 1957). 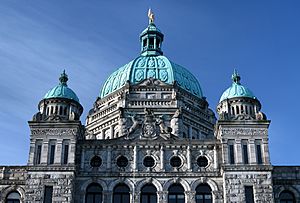 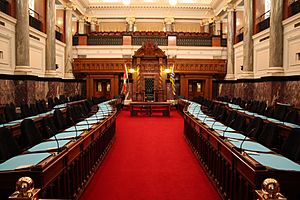 The legislative chamber inside the Parliament Building

Construction of a new Parliament Building was first authorized by an act of the provincial legislature in 1893, the Parliament Buildings Construction Act. The province, anxious to commemorate its growing economic, social and political status, was engaged in an architectural competition to build a new legislative building in Victoria, after outgrowing "The Birdcages", which were notoriously drafty and leaked in wet weather. Francis Rattenbury, a recent English immigrant, 25 years old, entered the contest and signed his drawings with the pseudonym "A B.C. Architect". He progressed to the second round, signing his drawing "For Queen and Province" and eventually won the competition.

Despite many problems, including exceeding budget—the original budget was $500,000; the final amount was $923,000—the British Columbia Parliament Buildings began operation officially during 1898. The grand scale of its 500-foot (150 m) long andesite façade, central dome and two end pavilions, the richness of its white marble, and combination of Baroque rigorous symmetry, use of domes and sculptural massing with the rusticated surfaces of the then popular Renaissance style. 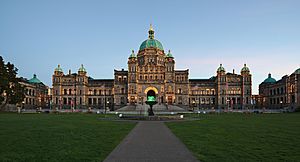 The buildings illuminated at dusk.

Its success garnered Rattenbury many more commissions in Victoria and other parts of the province, including the Legislative Library (constructed between 1913-1915 and the cornerstone of which was laid by Prince Arthur, Duke of Connaught), the design of the Empress Hotel, the Crystal Gardens indoor swimming pool nearby, and the Vancouver Court House (now the Vancouver Art Gallery). The andesite of the British Columbia Parliament Buildings is from Haddington Island in the Alert Bay Volcanic Belt. The granite used to build the buildings came from Nelson Island, at the mouth of Jervis Inlet, on the Sunshine Coast.

Besides the elected Members of the Legislative Assembly, two organizations have been granted the privilege of using the Legislative Chambers during the legislature's December recess: the British Columbia Youth Parliament (since 1924, except during its sessions of the late 1940s and early 1950s) and the British Columbia Universities' Model Parliament. 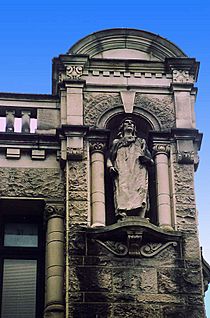 During the 1994 Commonwealth Games, free music concerts were held on the front lawns of the buildings, attracting as many as 40,000 people. Similar-sized crowds have gathered on the front lawn over the years, ranging from political protests and rallies, such as during the Solidarity Crisis of 1983, to celebrations of various kinds, including the BC 150 ceremonies.

All content from Kiddle encyclopedia articles (including the article images and facts) can be freely used under Attribution-ShareAlike license, unless stated otherwise. Cite this article:
British Columbia Parliament Buildings Facts for Kids. Kiddle Encyclopedia.