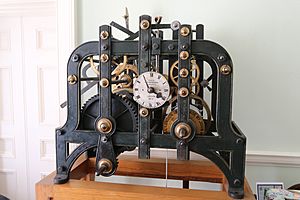 A turret clock in the museum display

The British Horological Institute (also known as the BHI) is the representative body of the horological industry in the United Kingdom. It was founded by a group of clockmakers in 1858, and has its current premises at Upton Hall in Nottinghamshire, which includes a museum of clock history. 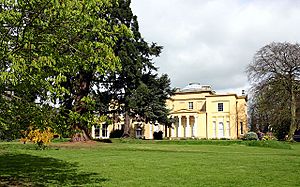 The BHI was founded in 1858 by a small group of clockmakers, one of whom was Edward Daniel Johnson. Their aim was to unify the British horological industry and trades in the face of large numbers of imports of clocks and watches from abroad. The Institute was an immediate success and within a year it had founded its own museum and library; it also began to offer evening classes in clock- and watch-making.

The journal of the Institute is the Horological Journal, which has been published monthly since September 1858. It is claimed to be the oldest continuously-published technical journal in the world.

The current premises of the BHI are at Upton Hall in Nottinghamshire, England. Its primary role is that of education, providing a standardised set of examinations for training horologists. It also maintains a list of members whom it considers sufficiently qualified to repair clocks and watches, and who adhere to a strict code of practice. Upton Hall is also home to the charitable Museum of Timekeeping at the British Horological Institute, which includes the original BHI Museum and Library.

The Institute offers a number of different kinds of membership. These include:

Associate Membership
Any individual with an interest in horology may subscribe as a member.
Accredited: Member of the BHI (MBHI)

BHI members can gain accredited Member-level status by passing the BHI examinations at Level 4. Accredited members at this level may use the postnominals MBHI.

Accredited: Fellow of the BHI (FBHI)

The next level of BHI accreditation is Fellowship. This can be gained by passing the BHI examinations at Level 5 or by making a successful application to the BHI based upon outstanding career achievements. Accredited members at this level may use the postnominals FBHI. 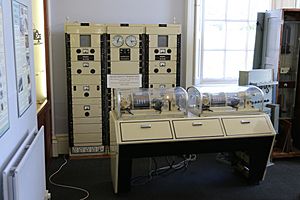 A Post Office speaking clock machine, on display at the museum

The Museum of Timekeeping is also housed at the home of the British Horological Institute.

The Museum of Timekeeping is an independent charitable Museum (Registered Charity Number 1176495), established in 1994 to hold in trust the collection and library, brought together by BHI members since its founding in 1858.

The Museum includes a collection of clocks, watches and timepieces and associated clock and watchmaking tools and ephemera. It can be visited during seasonal opening hours, plus a range of special events, or by booking a private group visit.

The Museum of Timekeeping Library is one of very few existing specialised libraries dealing primarily with horology. It is open to researchers by appointment, and its holding includes a number of rare documents, papers, letters and books, particularly dealing with the high points of British horology in the 18th and early 19th century, but its catalogue contains comparatively few titles published in the last several decades. An exception is THROUGH THE GOLDEN AGE – Charles Gretton – Watch and Clockmaking, a 660-page volume about the life, era, and creations of celebrated clockmaker and watchmaker Charles Gretton (1647–1731), published in 2016.

The institute's gold medal for an outstanding contribution to horology has been awarded to:

All content from Kiddle encyclopedia articles (including the article images and facts) can be freely used under Attribution-ShareAlike license, unless stated otherwise. Cite this article:
British Horological Institute Facts for Kids. Kiddle Encyclopedia.