The British Horse Society (BHS) is a membership-based equine charity, with a stated vision of "a Society which provides a strong voice for horses and people and which spreads awareness through support, training and education". It currently has more than 110,000 members, with a further 34,000 members affiliated through a British Riding Club, making it the largest equine membership organisation in the United Kingdom. It is one of the 19 organisations which form part of the British Equestrian Federation.

The BHS was founded in 1947 in the amalgamation of two organisations – the Institute of the Horse and Pony Club, and the National Horse Association of Great Britain. Mary Colvin was its first president.

The primary objectives of the BHS are:

The British Riding Clubs (BRC) movement became affiliated to The British Horse Society over fifty years ago, when several riding clubs from the South East England area approached the BHS with the idea of providing a scheme where riding clubs could become affiliated to the BHS, while remaining relatively autonomous, running their own affairs. Since then, the numbers have grown considerably, with more than 440 affiliated clubs, over 50 affiliated riding centres, and over 34,000 members, each coming within one of 23 administrative areas. Each riding club's membership is open to everyone, from leisure riders to competitors.

The aims of BRC are to help people ride, compete and train together at national competitions, training and social events. BRC areas organise a wide range of competitive, social and educational activities for their members, with championships held at some of Britain's most prestigious events, such as the Royal Windsor Horse Show, the Royal International Horse Show, and the London International Horse Show (Olympia).

The BHS has an extensive and world-standard system of qualifications, training and education, including the Horse Owner's Certificates which are aimed at the leisure rider, and the Stages exams which lead to various riding instructor's and groom's qualifications.

The BHS also maintains a Register of Accredited Professional Coaches in the UK and around the world.

The BHS Access and Rights of Way department works to improve the bridleways network throughout England, Scotland and Wales. It has created the 'National Bridleroute Network' of long distance equestrian routes, incorporating bridleways, byways and minor roads, which it has called 'bridleroutes'. This work is supported by a network of national committees and regional groups. The BHS is consulted about proposed legislation, government planning guidance, Definitive Maps and road schemes, and has influenced and continues to influence legislation.

The BHS were among a group of organisations against a decision by the BMW car company over their decision to reassign the use of BMW property in Oxfordshire, resulting in closure of an existing bridleway with no alternative offered. The BHS challenged this decision by BMW in court and subsequently lost and were ordered to repay legal costs to BMW. Some questioned BHS management's application of limited financial resources to the cause. The good intent of the BHS was recognised by many, as the continued loss of bridleways across the country has eroded the freedom of those participating in horseriding activities. A protest against the court's decision, supported by a local councillor, was unsuccessful.

The BHS Safety Department promotes the ongoing improvement of horse and rider safety. This includes campaigning for recognition and safe conditions for riders on Britain's roads.

Education of motorists and riders is a high priority. The Riding and Road Safety test is taken by more than 4,000 candidates every year. This helps to educate riders in road safety and to minimise the risks involved when riding on the road.

The society runs a website dedicated to safety advice and reporting safety incidents, www.horseaccidents.org.uk. The data collected is used to lobby for better conditions for equestrians. In the site's first two years, the BHS saw a 250% increase in road accidents reported to them, and incidents involving dog attacks helped influence changes to the Dangerous Dogs Bill.

The BHS Welfare team aims to prevent cases of cruelty and neglect through education. This is achieved through its network of welfare volunteers, advisory literature, and a dedicated team at the society's headquarters. The experience of BHS Welfare volunteers is intended to allow the society to respond quickly in an informed manner to reports of equine suffering and neglect, giving advice and guidance to horse owners on a long-term basis where necessary.

As well as responding to welfare concerns, the department lobbies government on a number of welfare-related issues; runs campaigns including the Ragwort Awareness Campaign; promotes responsible breeding through its 'Think Before You Breed' campaign and close link with the BHS Horse and Pony Breeds Committee; works closely with other welfare organisations and monitors the horses and ponies on the BHS's rehoming scheme.

In March 2016, the BHS launched its Dead Slow campaign, to encourage drivers to slow down to 15 mph and pass widely when they meet horses on the road.

The campaign earned national coverage on BBC TV and radio, featured on petrol pumps across the UK and was raised as an Early Day Motion in Parliament by Liz Saville-Roberts MP. 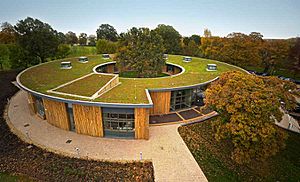 In 2010 the outdated premises were replaced with a state of the art eco-friendly HQ which sits within Abbey Park in Warwickshire. The 3.5-acre site offered a great location but came with various planning issues and constraints due to the rural location. The architects had to come up with a solution to have a minimal effect on the green belt land beyond. 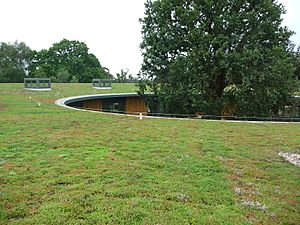 A view across the Sky Garden green roof showing the ancient oak tree standing at the centre of the British Horse Society Headquarters.

The design they came up with was just a single storey, and circled a mature oak tree which had stood on the site for years. Constructed from natural stone, clad with European Oak and topped with a sedum green roof, the aim was to create an ecosystem around the one central oak. The aim for the building was to create a high quality modern building, without compromising the surrounding countryside. To ensure this the materials used were sustainable sourced and the building was designed with this in mind.

The 2200sqm roof took around 3 weeks to install in the summer of 2010. The green roof featured a specialist drainage and filter layer, topped with extensive substrate and a pre grown sedum blanket. The roof provides insulation to the building, helping it stay cool in the hot summer months and warm during the winter. Studies show that a thick layer of vegetation can increase the efficiency of the roof by up to 60%. The rural location meant the green roof helped to reduce the aesthetic impact of the building and blended it into its surroundings.

All content from Kiddle encyclopedia articles (including the article images and facts) can be freely used under Attribution-ShareAlike license, unless stated otherwise. Cite this article:
British Horse Society Facts for Kids. Kiddle Encyclopedia.