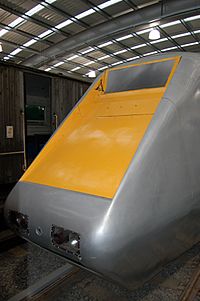 The APT-E (meaning Advanced Passenger Train Experimental) tilting train was the prototype Advanced Passenger Train unit. It was powered by gas turbines, the only multiple unit so powered that was used by British Rail. It was formed of two power cars (numbers PC1 and PC2), with two trailer cars (TC1 and TC2) in between. The cars were made of aluminium and were articulated to reduce the weight of the unit.

All content from Kiddle encyclopedia articles (including the article images and facts) can be freely used under Attribution-ShareAlike license, unless stated otherwise. Cite this article:
British Rail APT-E Facts for Kids. Kiddle Encyclopedia.