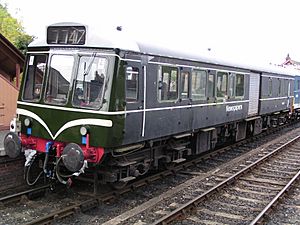 Class 127, no. 55976 at Bewdley on 15 October 2004. This vehicle was rebuilt as a parcels unit from 51625 (seen above), with the addition of roller-shutter doors. Now preserved at the Midland Railway Butterley, it is being rebuilt back to a passenger vehicle.

All content from Kiddle encyclopedia articles (including the article images and facts) can be freely used under Attribution-ShareAlike license, unless stated otherwise. Cite this article:
British Rail Class 127 Facts for Kids. Kiddle Encyclopedia.