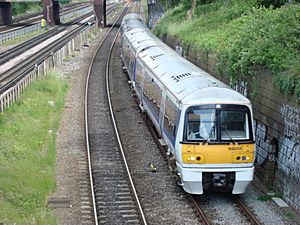 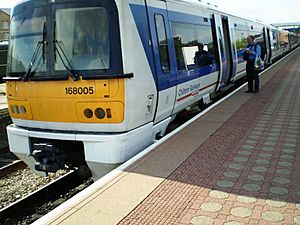 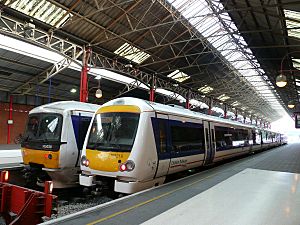 The Class 168 Clubman is a diesel multiple-unit (DMU) train used by Chiltern Railways for InterCity services between London and the Midlands. They were built in several batches from 1997 onwards. The first batch of units was classified 168/0 under TOPS and bore a large resemblance, both visually and in terms of electrical design, to the Class 165 units previously built by BREL at York. This is because they were based on plans originally drawn up by Network SouthEast and thus can be considered to be Networker Turbos. Subsequent builds, classified 168/1 and 168/2, were given the newer style cab and a new design of wiring and thus are part of the Turbostar family of trains.

All content from Kiddle encyclopedia articles (including the article images and facts) can be freely used under Attribution-ShareAlike license, unless stated otherwise. Cite this article:
British Rail Class 168 Facts for Kids. Kiddle Encyclopedia.