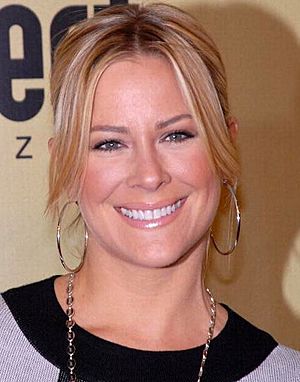 Brittany Ann Daniel (born March 17, 1976) is an American actress. She works mostly in television programs. She and her twin sister Cynthia performed in many venues using the "twin gimmick." She played Jessica Wakefield in the teen sit-com Sweet Valley High. When she Sweet Valley program ended, Cynthia decided to leave acting in favor of a career as a photographer and Brittany decide to keep right on acting. She played Kelly Pitts in the comedy-drama television series The Game.

All content from Kiddle encyclopedia articles (including the article images and facts) can be freely used under Attribution-ShareAlike license, unless stated otherwise. Cite this article:
Brittany Daniel Facts for Kids. Kiddle Encyclopedia.