Brodiaea coronaria is the type species of Brodiaea and also known by the common names harvest brodiaea and crown brodiaea. It is native to western North America from British Columbia to northern California, where it grows in mountains and grasslands.

Brodiaea coronaria is a perennial herb growing from a corm and producing an erect inflorescence with a few basal leaves. The inflorescence is up to about 25 centimeters tall and bears lilylike flowers on an array of pedicels.

Each flower is a tube several centimeters long opening into a bell-shaped corolla of six bright purple lobes each up to 3 centimeters long. In the center are three stamens and whitish sterile stamens known as staminodes. 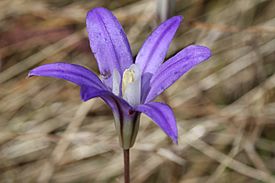 At the center of the flower are three stamens and whitish sterile stamens or staminodes (Anacortes, Washington).

The history of the scientific name of this species is somewhat tangled. The plant was first collected by Archibald Menzies during the Vancouver Expedition, and published as Hookera coronaria by Richard Salisbury in Paradisus Londinensis early in 1808. However, Salisbury had fallen out with fellow botanist James Edward Smith. Smith first published a moss genus, Hookeria, and then published a description of Salisbury's Hookera coronaria as Brodiaea grandiflora.

If it was Smith's intention to replace Salisbury's name, as has been suggested, it was partly successful, since although Salisbury's Hookera coronaria has priority over Smith's Brodiaea grandiflora, names as similar as Hookera and Hookeria are considered to be confusing and a formal proposal to conserve the names Brodiaea and Hookeria over the name Hookera was accepted. However, Salisbury's epithet coronaria still stands since Smith's Brodiaea grandiflora is now considered to have been an illegitimate name when published. In 1917, after the Kew Rule had vanished from botanical nomenclature, Willis Jepson formally published the combination Brodiaea coronaria, now accepted as the botanical name for this species.

Synonyms, in full or in part, include:

There are two subspecies of this plant:

Native Americans and early European settlers of the continent harvested the small bulbs for food. They are edible raw, with a nutty or celery-like taste.

All content from Kiddle encyclopedia articles (including the article images and facts) can be freely used under Attribution-ShareAlike license, unless stated otherwise. Cite this article:
Brodiaea coronaria Facts for Kids. Kiddle Encyclopedia.