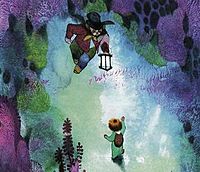 Illustration of Broučci by Jiří Trnka 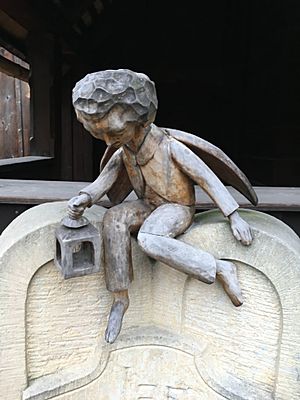 A carving on Broučci's headstone.

Broučci is a classic children's book by Jan Karafiát published in the Czech language in the early 1870s. The title is the Czech word for beetles, and the word is also used for "traditional Czech figures of fairylike insect people" such as the characters in the book. In English, the title is often translated as Fireflies.

Originally published anonymously in 1876 as Broučci pro malé i velké děti (Fireflies for Small and Big Children), the first edition received very little acclaim. It was re-discovered and popularized in 1893 by publicist Gustav Jaroš (Gamma). He published an unsigned review in the magazine Čas (Time), and started an unusual and long-lasting wave of popularity for the book. Jaroš later called Broučci "perhaps the most beautiful blossom of the Czech children literature". After the review, the first edition was quickly sold out and the book was reprinted in 1894 and many times since.

Only with the 10th edition of the book, published in 1912, was the book published under the name of its author, Jan Karafiát. By 1942, the book was translated into English. By 2004, 80 editions had been published in the Czech language.

Broučci is considered a classic Czech children's book. However, the critical reception was not always positive. Along with Karafiát's poetic and imaginative style, the work contains elements of moralistic conservatism, caused by conviction of the author - a Calvinist clergyman - of a necessity to spend a life "in obedience and resignation to the will of God". It has been acclaimed for its imaginative storyline and natural lyricism, connected with humanity and poetic interpretations of an imaginary world seen through children's eyes.

The book has been featured in several animated films. In 1967, Libuše Koutná made an eight-part TV series called simply Broučci. In the 1990s a new version was published under the same title.

Czech puppet maker and illustrator Jiří Trnka created one of the most adored illustration sets for the book. The story of the fireflies also inspired a composition by Václav Trojan. During World War II, the inmates of the Nazi Theresienstadt concentration camp dramatized and performed their own version of the book. The last performance in Theresienstadt was canceled because the inmates of the concentration camp had to help harassed and tormented new inmates arriving in an overloaded transport.

All content from Kiddle encyclopedia articles (including the article images and facts) can be freely used under Attribution-ShareAlike license, unless stated otherwise. Cite this article:
Broučci Facts for Kids. Kiddle Encyclopedia.