Rose Amy Fyleman (1877–1957) was an English writer and poet, noted for her works on the fairy folk, for children. Her poem "There are fairies at the bottom of our garden" was set to music by English composer Liza Lehmann. Her Christmas carol "Lift your hidden faces", set to a French carol tune, was included in the Anglican hymnal Songs of Praise (1931) as well as in the Hutterian Brotherhood's Songs of Light (1977).

Rose Fyleman was born in Nottingham on 6 March 1877, the third child of John Feilmann and his wife, Emilie, née Loewenstein, who was of Russian extraction. Her father was in the lace trade, and his Jewish family originated in 1860 from Jever in the Grand Duchy of Oldenburg, currently Lower Saxony, Germany.

As a young girl, Fyleman was educated at a private school, and at the age of nine first saw one of her compositions published in a local paper. Although she entered University College, Nottingham, she failed in the intermediate and was thus unable to pursue her ambition of becoming a schoolteacher. Despite this, Fyleman had a good singing voice, and therefore decided to study music. She studied singing in Paris, Berlin and finally at the Royal College of Music in London, where she received her diploma as associate of the Royal College of Music. She returned to Nottingham shortly afterward, where she taught signing and helped in her sister's school. Along with other members of her family, she anglicised the spelling of her name at the outbreak of the First World War in 1914.

When she was forty, Fyleman sent her verses to Punch magazine and her first publication "There are Fairies at the Bottom of Our Garden" appeared in May 1917. The immense response from publishers prompted Fyleman to submit several other fairy poems. Her verses enjoyed tremendous success among readers and her first collection Fairies and Chimneys (1918) was reprinted more than twenty times over the next decade. During the 1920s and early 1930s Rose Fyleman published multiple verse collections, wrote drama for children, and for two years, edited the children's magazine Merry-Go-Round. Fyleman was also a skilled linguist who translated books from German, French and Italian.

Rose Fyleman was one of the most successful children's writers of her generation and she saw much of her earlier poetry become proverbial. She died at a nursing home in St. Albans, Hertfordshire on 1 August 1957. 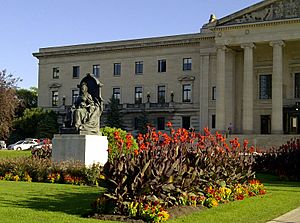 In December 1929, Rose Fyleman was invited to Winnipeg, Canada, as the guest speaker at a couple of women's clubs. She was staying at the Fort Garry Hotel, near the Manitoba Parliament Building on Broadway Ave. One evening, Rose and the president of one of the clubs decided to take a stroll to the parliament building, so that Rose could view the statue of Queen Victoria, located on its front lawn. It was such a beautiful winter evening that when they got back to the hotel, Rose was inspired to write a poem entitled "Winnipeg at Christmas." The poem appeared in print soon after - on New Year's Day, 1930 - in the British magazine Punch. This poem is familiar to many inhabitants of Winnipeg, who were first exposed to it in school, and is often cited during the Christmas season. Fred Penner, a children's entertainer from Winnipeg, included it on his 1990 recording for Christmas, entitled "The Season." In 2018 The Winnipeg Singers, a choir from Winnipeg, commissioned composer Michael A. McKay to write a choral setting of the poem and premiered it in their 2018 Christmas concert, "In Winnipeg It's Christmas".

All content from Kiddle encyclopedia articles (including the article images and facts) can be freely used under Attribution-ShareAlike license, unless stated otherwise. Cite this article:
Rose Fyleman Facts for Kids. Kiddle Encyclopedia.