The Fort Garry Hotel is a historic hotel in Downtown Winnipeg, Manitoba that opened for the first time on December 11, 1913. It is one of Canada's grand railway hotels and was designated as a National Historic Site of Canada in 1981. A national heritage park connected to the hotel and to the remains of Upper Fort Garry was completed in 2017-18.

Built between 1911 and 1913 by the Grand Trunk Pacific Railway, it is located one block from the railway's Union Station, and was the tallest structure in the city when it was completed. Like other Canadian railway hotels, it was constructed in the "château style" (also termed the "neo-château" or "châteauesque" style), which also reflects the François I style of hotel prevalent in the eastern United States at the turn-of-the-20th-century. Henry Janeway Hardenbergh initiated the architectural trend, with New York City's Plaza Hotel (1906–07) as his most well known structure. The Fort Garry Hotel has more than a passing similarity to The Plaza, with related features that include: the classic base, shaft, and capital divisions of the skyscraper; flat facades with slightly projecting, four-bay end pavilions; an arcade of large, segmented windows below a prominent cornice; and, the composition of the steeply sloped roofs. Architects Ross and MacFarlane of Montreal modelled their original plans for the hotel after Ottawa's Château Laurier; plans originally called for a 10-storey structure, but two floors were added during construction. 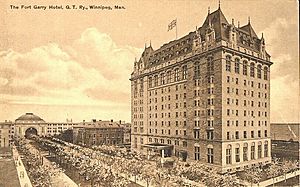 Initially, the new hotel was to be called The Selkirk, but was instead named after Upper Fort Garry, which once stood at the junction of the Red and Assiniboine Rivers. The hotel was built at a strategic location on Broadway, between Fort and Garry Streets, providing a luxury hotel for railway travellers. It was the first commercial building to be erected on Broadway and the only hotel to be built there. The hotel's early prominence led it to have many famous guests, including Nelson Eddy, Harry Belafonte, Charles Laughton, Laurence Olivier, Liberace, Arthur Fiedler, Louis Armstrong, Gordie Howe, Lester Pearson, as well as King George VI and Queen Elizabeth, who stayed during their 1939 visit to Canada.

The hotel, originally owned by the Grand Trunk Pacific Railway, and later owned by the Canadian National Railway after Grand Trunk was nationalized and absorbed into CN. In 1979, the hotel was purchased by the prominent John Draper Perrin family of Winnipeg, who operated it as an independent hotel until 1987. It was then owned for a few years by a company controlled by Quebec hotelier Raymond Malenfant. Presently it is run as an independent hotel.

According to local folklore, the hotel is haunted.

The Fort Garry Hotel was the site of the Winnipeg studio of CNR Radio, the precursor to CBC Radio, between 1923 and 1932, using the original CKY transmitter on 665 KHz, moving to 780 KHz in 1925. CNR purchased time on stations they did not own, called "phantom" stations.

All content from Kiddle encyclopedia articles (including the article images and facts) can be freely used under Attribution-ShareAlike license, unless stated otherwise. Cite this article:
Fort Garry Hotel Facts for Kids. Kiddle Encyclopedia.