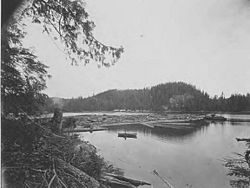 Broughton Island is an island in the Broughton Archipelago of the Queen Charlotte Strait area of the Central Coast of British Columbia, located northwest of Gilford Island.

Broughton Island and the Broughton Archipelago, and Broughton Strait nearby, were all named in 1792 by Captain George Vancouver, for Commander William Robert Broughton, captain of HMS Chatham during his first tenure in British Columbia, and thereafter upon his return to the British Columbia Coast, of HMS Providence. HMS Discovery, Vancouver's ship, and HMS Chatham under Broughton were anchored off the south shore of this island on July 28, 1792.

All content from Kiddle encyclopedia articles (including the article images and facts) can be freely used under Attribution-ShareAlike license, unless stated otherwise. Cite this article:
Broughton Island (British Columbia) Facts for Kids. Kiddle Encyclopedia.