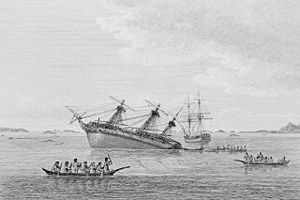 The Discovery ran aground in early August 1792 on hidden rocks in Queen Charlotte Strait near Fife Sound. Within a day the Chatham also ran aground on rocks about two miles away.

The strait lies between the mainland and Vancouver Island portions of the Regional District of Mount Waddington, a form of regional municipal governance with power over zoning, building and sewer permits and inter-municipal integration. Most communities in the region, however, are Indian reserve communities of the Kwakwakaʼwakw peoples which are outside the jurisdiction of regional district governance. The traditional territories of most of the various Kwakwaka'wakw peoples overlap in the strait, which is a vital fishery resource and transportation link between their communities.

All content from Kiddle encyclopedia articles (including the article images and facts) can be freely used under Attribution-ShareAlike license, unless stated otherwise. Cite this article:
Queen Charlotte Strait Facts for Kids. Kiddle Encyclopedia.