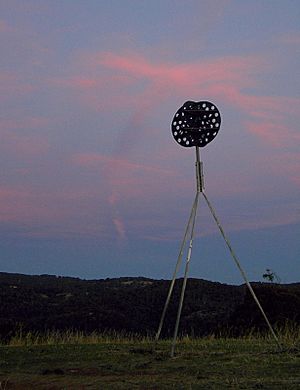 Bench and survey markers at the Brown Hill trig station

Brown Hill is a hill in the Australian state of South Australia located on the western edge of the Mount Lofty Ranges, 7 kilometres (4.3 mi)* southeast of the centre of Adelaide, in the suburb of Brown Hill Creek. Brown Hill rises to 312 metres (1,024 ft)* above sea level.

Brown Hill, along with Mount Lofty, Green Hill, Flagstaff Hill and Black Hill, was used by Colonel William Light as a trig station for the 1837 survey of what is now the Adelaide city centre.

The hill was covered with grasses at the time of European settlement, probably due the burning practices of the Kaurna people. Grazing of livestock since European settlement has resulted in loss of much of the native vegetation and the ingress of many weed species. In 1998, a 30 hectares (74 acres)* site, including Brown Hill, was acquired by the City of Mitcham and established as Brownhill Reserve. A management plan was established to attempt regenerate the native flora and to control exotic weeds.

All content from Kiddle encyclopedia articles (including the article images and facts) can be freely used under Attribution-ShareAlike license, unless stated otherwise. Cite this article:
Brown Hill, Mitcham Facts for Kids. Kiddle Encyclopedia.