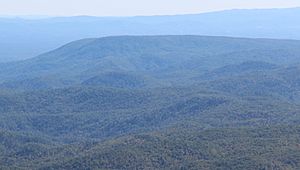 The earliest published mentions of the lights begin in 1912, on the heels of the first publication of Jules Verne's 1906 novel Master of the World in English in 1911. An important plot point in the novel consists of a mad scientist constructing an airship inside his secret lair in Table Rock, near Morganton, North Carolina, activities which cause strange lights to appear on the summit of the mountain. The rapidly expanding electrification of the Linville Gorge area from the 1890s through the 1910s, seems to be the origin of the Brown Mountain Lights legend, possibly helped by Verne's novel. A number of travelogues, including accounts of mysterious happenings and ghost stories, were published about the region prior to 1900; but there is no mention of unexplained lights in any of these historical sources. Mansfield's investigation found many locals were unaware of any strange lights until 1910 or later. Joseph Loven, who lived next to Loven's Hotel, said he had first noticed the lights in 1897, but took no interest in them, and didn't hear anyone else talking about them, until his neighbor, the Rev. C. E. Gregory, began trying to draw public attention to them around 1910.

One early account of the lights dates from September 24, 1913, as reported in the Charlotte Daily Observer. It described “mysterious lights seen just above the horizon every night,” red in color, appearing “punctually” at 7:30 PM and again at 10 PM; attributing the information to Anderson Loven, “an old and reliable resident”.

As in Verne's novel, locals asked their Congressmen for a government investigation; in 1913 United States Geological Survey employee, D.B. Sterrett, was dispatched to the area and quickly found that the headlights of westbound Southern Railways locomotives would have been visible from Loven's Hotel, and the train schedules he consulted left him no doubt that these were the cause of the lights that were being reported. In July of 1916, a flood caused train activity around Brown Mountain to cease for several weeks, which provided an opportunity for some to doubt Sterrett's conclusions. George Anderson Loven, whose hotel was doing a good business from all the visitors keen to see the light, told the Lenoir News that September that it was still being seen nightly, although it isn't clear whether it was one specific light that he referred to, or many different lights, or possibly even every nighttime light visible from his hotel that he considered mysterious. It was never required that train headlights be the only mystery light source, as car headlights were another likely contributor, but this argument is often repeated today.

Reports of odd lights continued, and a more formal US Geological Survey study began in 1922, which determined that witnesses had misidentified automobile or train lights, fires, or mundane stationary lights. However, according to a marker on the Blue Ridge Parkway, a massive flood struck the area soon after the completion of the USGS study; all electrical power was lost and trains were inoperative for a period of time thereafter. Several automotive bridges were also washed out. The Brown Mountain lights, however, continued to appear.

Appalachian State University installed two low light cameras on rooftops that overlook Brown Mountain and Linville Gorge; by 2014 these cameras had produced 6,300 viewing hours worth of data without any unexplainable lights being recorded.

All content from Kiddle encyclopedia articles (including the article images and facts) can be freely used under Attribution-ShareAlike license, unless stated otherwise. Cite this article:
Brown Mountain Lights Facts for Kids. Kiddle Encyclopedia.