Adults are about 3.0 to 5.0 cm long. Females are larger than males. It is light brown in colour with a lighter belly and some patterns. Its feet are usually not webbed. The ends of their toes have suckers for climbing.

This frog can live in marshes, grasslands or on mountains. It lays eggs 500-600 at a time on underwater plants in ponds, streams, dams, and ditches. It takes months for them to grow into frogs. Unlike most frogs, the brown tree frog can lay eggs at any time during the year. 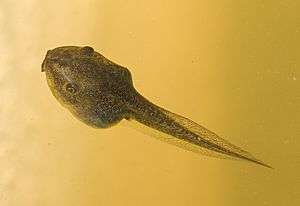 The tadpoles grow into frogs slowly.

In New Zealand, brown frog tadpoles often given to schoolchildren so they can watch the tadpoles become frogs. This frog is now an invasive specie in New Zealand because people set the young frogs free outside after the project is done. Once they are released, brown tree frogs can kill New Zealand frogs by eating all their food or by giving them diseases from other places.

All content from Kiddle encyclopedia articles (including the article images and facts) can be freely used under Attribution-ShareAlike license, unless stated otherwise. Cite this article:
Brown tree frog Facts for Kids. Kiddle Encyclopedia.