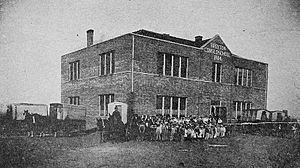 Broxton is an unincorporated community in Caddo County, Oklahoma, United States. Broxton had an independent school district until the 1990s, but it was consolidated with the Fort Cobb school district, becoming Fort Cobb-Broxton Public Schools

The community of Pine Ridge was also served by the Broxton school district.

Broxton and the surrounding regions has been an important setting of Marvel Comics' series Thor since the late 2000s. The Norse god Thor's home Asgard became a floating landmass outside of Broxton. Although the Asgardians were welcomed by the locals, in the 2011 miniseries Fear Itself, Odin, resentful of being made the recipient of humans' altruism, and sensing the return of an ancient enemy, leads his people back to Asgard's former location.

Broxton is also featured in season two of Agent Carter, as the childhood home of antagonist Agnes Cully (aka Whitney Frost).

All content from Kiddle encyclopedia articles (including the article images and facts) can be freely used under Attribution-ShareAlike license, unless stated otherwise. Cite this article:
Broxton, Oklahoma Facts for Kids. Kiddle Encyclopedia.