The Bryson City Island Park is a small island located in Bryson City, North Carolina. It is located in the Tuckasegee River, at the mouth of historic Deep Creek, which flows from the Great Smoky Mountains National Park.

The Island Park was renewed in the 1980s and serves as a recreational destination for tourists and locals alike. The trails were created by Bryson City resident R.T. (Buddy) Abbott, to whom the park is dedicated.

The Island Park was long accessible by a swinging, wooden footbridge across the Tuckasegee River from the center of the Bryson City business district. In 2005, the island suffered damage from winds and severe flooding from Hurricane Katrina. The island had to be closed to the public for several years.

In 2008, a new, fixed concrete bridge was erected to replace the old swinging bridge. A kayaking slalom course was created on the island that makes use of the white water rapids, most notably the "Devil's Dip" rapid. For a period, Island Park was the site of the Bryson City Fire Department's annual walk through "Haunted Halloween island," a well-known fundraiser.

Anglers enjoy the waters around the island park because of the wide variety of fish species, including Brown Trout, Rainbow Trout, Brook Trout, Carp, Red Horses, Small and Large mouth Bass, Catfish, White Bass, Walleye, and Rock Bass. Several companies offer private trips on the river for fishing enthusiasts. As in all public waters in North Carolina, both natural and artificial lures are allowed. With the exception of a limit of seven trout, there are no limits on catches.

The park's secluded, unspoiled landscape attracts picnickers, hikers, and wildlife spotters. The official bird of the state of North Carolina, the Cardinal, nests on the island during certain parts of the year. The park offers roughly ten picnic tables along with trash cans and recycling bins. The park offers roughly a mile of dirt trails that circle around the island and through its center. Historic Deep Creek, flowing from the Great Smoky Mountains National Park into the Tuckaseegee, has its mouth across from Island Park. 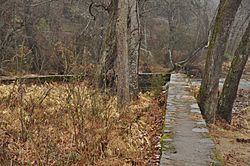 In 2005, Bryson City secured two $50,000 grants to be used for introducing some local fauna to the island park. The town intends to improve and add to the island's walking paths and gardens. It may build an outdoor amphitheater on the island, to add to the park as a "beautiful, natural focal point in the heart of Bryson City".

All content from Kiddle encyclopedia articles (including the article images and facts) can be freely used under Attribution-ShareAlike license, unless stated otherwise. Cite this article:
Bryson City Island Park Facts for Kids. Kiddle Encyclopedia.