Bryson City is a town in Swain County, North Carolina in the United States. The population was 1,424 as of the 2010 Census. It is the county seat of Swain County. 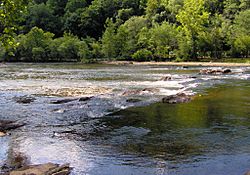 Bryson City is centered around the junction of Everett Street and Main Street. Main Street is part of U.S. Route 19, which connects Bryson City to Cherokee to the northeast and Murphy to the southwest.

There were 588 households out of which 21.8% had children under the age of 18 living with them, 38.1% were married couples living together, 12.8% had a female householder with no husband present, and 44.9% were non-families. 41.3% of all households were made up of individuals and 20.7% had someone living alone who was 65 years of age or older. The average household size was 2.09 and the average family size was 2.78.

Native Americans have been living and hunting in the vicinity of what is now Bryson City for nearly 14,000 years. The village of Kituhwa, which the Cherokee believed to be their oldest village, was located along the Tuckasegee immediately upstream from Bryson City. In 1567, an orata (minor chief) from Kituhwa is believed to have met with Spanish explorer Juan Pardo in the French Broad Valley to the north. Although Kituhwa was burned by American soldiers in 1776, the Cherokee continued to hold annual ceremonial dances at the site throughout the 19th century.

Around 1818, a Cherokee chief known as Big Bear received a 640-acre (2.6 km2) reservation of land immediately west of the confluence of Deep Creek and the Tuckasegee River, which included most of what is now Bryson City. Big Bear sold part of his reservation to Darling Belk in 1819 and another part to John B. Love in 1824. Throughout the 1830s, Belk's heirs and Love fought an extended legal battle over control of the Big Bear reservation, with Love finally prevailing in 1840. The following year, Love sold part of the land to James and Diana Shular. The Shulars, in turn, sold off parts of their land to Colonel Thaddeus Bryson and merchant Alfred Cline. A small hamlet known as Bear Springs developed amidst what was once Big Bear's reservation.

Swain County was formed from parts of Jackson County and Macon County in 1871, and the new commissioners first met at Cline's store (now operated by Cline's widow, Lucy Ann Raby Cline) at Bear Springs. Lucy Ann Raby Cline agreed to sell several lots of her land for the formation of a county seat for the new county. The county seat, initially known as Charleston, was laid out in a T-shape formed by what is now Main Street and Everett Street (the latter street was named for the county's first sheriff, Epp Everett). The first Swain County Courthouse was completed in 1874. In 1872, shortly after the completion of the new jail, a legendary jailbreak occurred at the Swain County jail when a gang led by Harvey Cooper stormed the jail and freed Tom Colvert, whom they deemed unjustly imprisoned for killing a rival at a saloon in Robbinsville.

In 1889, the people of Charleston changed the city's name to "Bryson City" to acknowledge the many services rendered to the city by Thaddeus Bryson and to eliminate the confusion brought about by sharing a name with Charleston, South Carolina. The Western North Carolina Railroad laid tracks through Bryson City in 1884, greatly easing transportation to the previously-remote area. The Bryson City Bank opened in 1904 and the current Swain County Courthouse was completed in 1908. 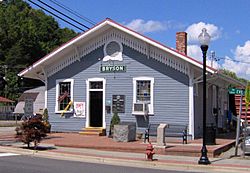 The Great Smoky Mountains National Park, which opened in 1933, provides a major source of revenue for Swain County. Horace Kephart, an author and outdoors enthusiast who operated out of Bryson City for several years, was a key early proponent for the creation of the park. The Deep Creek section of the park, which is immediately north of Bryson City, is home to a large campground and multiple trailheads. The park's main eastern entrance is located just a few miles east of Bryson City at Cherokee. Cherokee is also home to the southern terminus of the Blue Ridge Parkway.

The completion of Fontana Dam in 1944 inundated the only highway connecting Bryson City with the remote area of the Smokies known as the North Shore. The U.S. government began constructing a new highway in 1948, although work on this highway (known as Lakeview Drive) was embarrassingly slow. By 1972, only 7 miles (11 km) had been completed. Environmental and financial issues stalled the project, and the road became known to locals as "The Road to Nowhere". In 2007, the National Park Service deemed the road's construction to be in violation of the Great Smoky Mountains National Park's general management plan, and began working with Swain County to find an alternative.

The increasing popularity of the automobile led to a decline in railroad transportation, and Southern Railway (who had replaced the Western North Carolina Railroad) dropped passenger service in 1948. After Norfolk Southern ended freight traffic on the railroad in 1985, the state of North Carolina purchased the tracks. In 1988, a scenic line known as the Great Smoky Mountains Railroad was established with its depot and departure point in Bryson City.

In Cormac McCarthy's 1979 novel, Suttree, the title character winds up in Bryson City after wandering over the mountains from Gatlinburg. He is kicked out of a restaurant for swearing at a waitress and is refused service at a bar before buying a bus ticket back to Knoxville.

In 2015, the first FM station was launched. WTIJ-FM (100.7) broadcasts local and nationally syndicated ministers as well as plays Christian music. The station is owned by Grace Christian Academy and broadcasts over the air and online 24/7.

All content from Kiddle encyclopedia articles (including the article images and facts) can be freely used under Attribution-ShareAlike license, unless stated otherwise. Cite this article:
Bryson City, North Carolina Facts for Kids. Kiddle Encyclopedia.