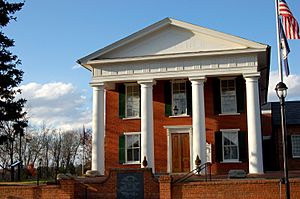 Buckingham is a census-designated place (CDP; listed as Buckingham Courthouse) in and the county seat of Buckingham County, Virginia, United States. The population as of the 2010 Census was 133.

The town of Buckingham was established in 1818, and originally named Maysville, before the name was changed to that of the county.

The second courthouse, built between 1822 and 1824, was designed by Thomas Jefferson, but burned down in 1869. The current courthouse was completed on the same site in 1873.

The Buckingham Courthouse Historic District and Woodside are listed on the National Register of Historic Places.

All content from Kiddle encyclopedia articles (including the article images and facts) can be freely used under Attribution-ShareAlike license, unless stated otherwise. Cite this article:
Buckingham, Virginia Facts for Kids. Kiddle Encyclopedia.