Buckman is a neighborhood in the Southeast section (and a small portion of the Northeast section) of Portland, Oregon. The neighborhood is bounded by the Willamette River on the west, E Burnside St. on the north (except for a triangle between NE 12th Ave. and NE 14th Ave. in which NE Sandy Blvd. forms the northern border), SE 28th Ave. on the east, and SE Hawthorne Blvd. on the south.

The neighborhood is named for late 19th century orchardist, and school board and city council member, Cyrus Buckman. In the 19th Century the neighborhood was the center of the City of East Portland before it merged with the City of Portland on the west bank of the Willamette River. Today, the historic center of East Portland is designated as the East Portland Grand Avenue Historic District. The former Washington High School, built in 1924, is also in Buckman. Buckman is home to Ota Tofu Company, which has been described as the oldest existing tofu shop in the United States. 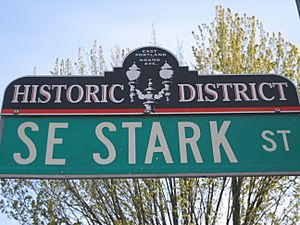 Three bridges connect Buckman to neighborhoods in Southwest Portland across the Willamette: the Old Town Chinatown neighborhood via the Burnside Bridge, and Downtown Portland via the Morrison and Hawthorne Bridges.

All content from Kiddle encyclopedia articles (including the article images and facts) can be freely used under Attribution-ShareAlike license, unless stated otherwise. Cite this article:
Buckman, Portland, Oregon Facts for Kids. Kiddle Encyclopedia.