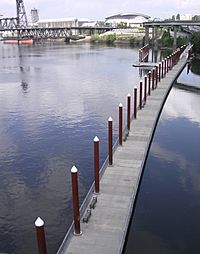 The Eastbank Esplanade (officially Vera Katz Eastbank Esplanade) is a pedestrian and bicycle path along the east shore of the Willamette River in Portland, Oregon, United States. Running through the Kerns, Buckman, and Hosford-Abernethy neighborhoods, it was conceived as an urban renewal project to rebuild the Interstate 5 bicycle bypass washed out by the Willamette Valley Flood of 1996. It was renamed for former Portland mayor Vera Katz in November 2004 and features a statue of her near the Hawthorne Bridge.

Construction began in October 1998, and the walkway was dedicated in May 2001.

The esplanade was closed for 21 days due to high river levels in 2011, the first time it had been closed since it was built.

On the same day in February 2015, two dead bodies were discovered along the esplanade. The events appear to be unrelated.

Public artworks installed along the esplanade include Alluvial Wall, Echo Gate, the Ghost Ship sculpture, the statue of Vera Katz and Stack Stalk.

All content from Kiddle encyclopedia articles (including the article images and facts) can be freely used under Attribution-ShareAlike license, unless stated otherwise. Cite this article:
Eastbank Esplanade Facts for Kids. Kiddle Encyclopedia.