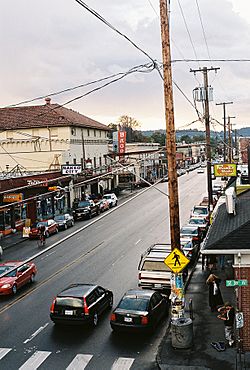 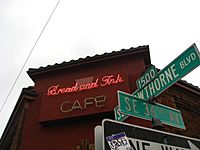 Bread and Ink cafe at 36th and Hawthorne in Portland, Oregon 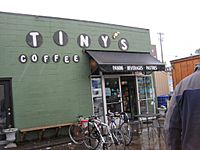 Tiny's Coffee at 12th and Hawthorne in Portland, Oregon
Some Hawthorne establishments

The Hawthorne District in Portland, Oregon, is an area of Southeast Portland on SE Hawthorne Blvd. that runs from 12th to 60th Avenues, with the primary core of businesses between 30th and 50th Avenues. The area has numerous retail stores, including clothing shops, restaurants, bars, brewpubs and microbreweries.

Hawthorne Boulevard was named after Dr. J.C. Hawthorne, the cofounder of Oregon's first mental hospital. Originally named "U" Street, the road was renamed Asylum Avenue in 1862. In 1883 the privately owned Oregon Hospital for the Insane was replaced by a new state-run facility located in Salem, today's Oregon State Hospital. The "distasteful" name Asylum Avenue was abandoned in April 1888 when the street was renamed Hawthorne Avenue by city ordinance in honor of Dr. Hawthorne. It was further renamed Hawthorne Boulevard in March 1933.

Neighbors organized and prevented a McDonald's restaurant from being built at the site of a former Arby's restaurant. The vacant building was replaced with condominiums and retail shops on the first floor.

All content from Kiddle encyclopedia articles (including the article images and facts) can be freely used under Attribution-ShareAlike license, unless stated otherwise. Cite this article:
Hawthorne, Portland, Oregon Facts for Kids. Kiddle Encyclopedia.