Sunnyside is a neighborhood in the south east section of Portland, between SE Stark Street and SE Hawthorne Blvd. (north to south) and from SE 28th Ave. to SE 49th Ave. (west to east). The Sunnyside Neighborhood motto is "Proud Past, Bright Future". Sunnyside has a "strong sense of Portland individuality" with many locally owned coffee shops and businesses. Sunnyside is sometimes referred to as the Belmont neighborhood, for its main commercial street. Sunnyside is bordered by Laurelhurst to the north, Richmond to the south, Buckman to the west, and Mount Tabor to the east. Because of its Victorian architecture and bohemian culture, Hawthorne/Belmont is often compared to San Francisco's Haight Ashbury district. Sunnyside has been called Portland's "uncontested champion of eco-consciousness". 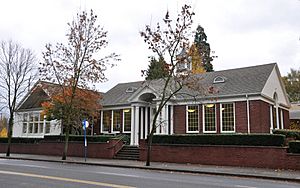 Peacock Lane, running north and south between Stark and Belmont, is a street known locally for lavish Christmas decorations and displays.

The Sunnyside Piazza, at the intersection of SE 33rd and Yamhill, includes a huge sunflower painted on the road. This was one of Portland's first city repair projects. Residents have gathered to repaint the intersection every Memorial Day weekend since 2000.

The Belmont Firehouse is a historic firehouse that now operates as an educational museum. 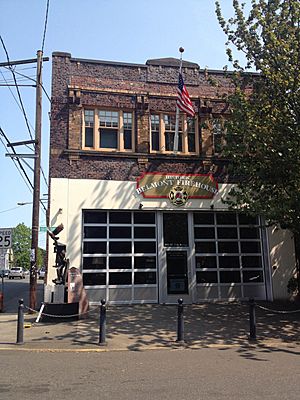 The Movie Madness Museum, housed in a movie rental store, contains over 100 pieces of memorabilia from classic movies such as Blade Runner, Citizen Kane, and the Sound of Music. 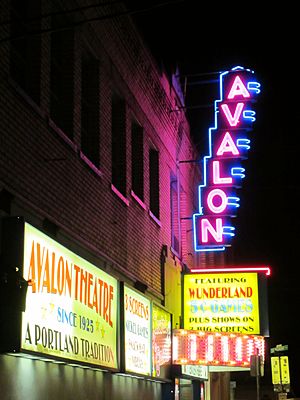 All content from Kiddle encyclopedia articles (including the article images and facts) can be freely used under Attribution-ShareAlike license, unless stated otherwise. Cite this article:
Sunnyside, Portland, Oregon Facts for Kids. Kiddle Encyclopedia.