Kids Encyclopedia Facts
For the park and volcano that the neighborhood surrounds, see Mount Tabor (Oregon).

Mount Tabor is the name of a volcanic cinder cone, the city park on the volcano, and the neighborhood of Southeast Portland that surrounds it, all in the U.S. state of Oregon. The name refers to Mount Tabor, Israel. It was named by Plympton Kelly, son of Oregon City pioneer resident Clinton Kelly. 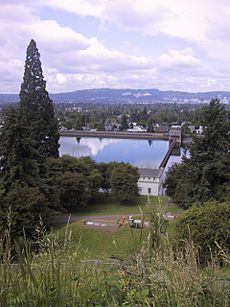 Before becoming part of Portland in 1905, Mount Tabor was a rural farming community dating back to the 1850s. It became a city-recognized neighborhood (encompassing a far smaller area than its historical boundaries) in 1974.

All content from Kiddle encyclopedia articles (including the article images and facts) can be freely used under Attribution-ShareAlike license, unless stated otherwise. Cite this article:
Mount Tabor, Portland, Oregon Facts for Kids. Kiddle Encyclopedia.