Buena Vista is an unincorporated community in Polk County, Oregon, United States. It is located on the Willamette River, and is the western landing for the Buena Vista Ferry. It is approximately 6 miles south-southeast of Independence. 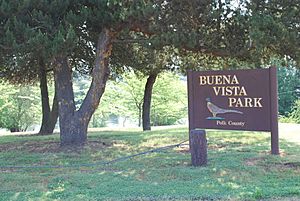 Buena Vista was named in about 1850 by Reason B. Hall, who settled on a Donation Land Claim there in 1847. Some of Hall's relatives had participated in the Battle of Buena Vista during the Mexican–American War. About the same time he named the community, Hall also started Halls Ferry across the Willamette. The ferry later became known as the Buena Vista Ferry, which is still in operation today. Later one of Hall's sons, B.F. Hall, operated another Halls Ferry north of Independence.

Buena Vista was once the home of a pottery factory that shipped its wares all over Oregon via the Willamette River. One of the earliest settlements in Oregon, it once had a much greater population because of the pottery industry, as well as being an important hops-growing area. Buena Vista had saloons, a hotel, a school, a church, an I.O.O.F. hall and a store. The town later went into decline, especially because the railroad bypassed Buena Vista and instead was routed through Independence. Today, most of the principal buildings are gone and the community is considered a ghost town by authors of ghost town guidebooks, although local residents tend to disagree. Buena Vista formerly had a post office by the same name. The post office ran from 1866 to 1935.

All content from Kiddle encyclopedia articles (including the article images and facts) can be freely used under Attribution-ShareAlike license, unless stated otherwise. Cite this article:
Buena Vista, Oregon Facts for Kids. Kiddle Encyclopedia.