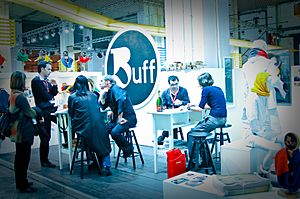 Buff is the registered trade mark for the headwear produced by Original Buff S.A., a company from Igualada, near Barcelona in Catalonia, Spain, since they were established in 1992.

Buff was developed by Joan Rojas in 1991. It was originally designed for wind protection while motorcycling. It is a tube of microfibrous fabric that can be reshaped to be worn in different ways. It can be worn as a scarf, bandanna, headband, beanie, face mask, tube top, helmet liner, wristband, or cap. It can also be worn pirate or Sahara style. The Buffs are made on a special loom shaped like a tube. It is designed to make the finished garment seamless.

All content from Kiddle encyclopedia articles (including the article images and facts) can be freely used under Attribution-ShareAlike license, unless stated otherwise. Cite this article:
Buff (clothing) Facts for Kids. Kiddle Encyclopedia.