Perhaps the most impressive peak in the Bugaboos, Bugaboo Spire sits between the Vowell and Crescent glaciers, just under 2 km West of the ACC's Conrad Kain hut. It has some of the most spectacular alpine climbing in Canada.

The Spire was first climbed by Conrad Kain in 1916. 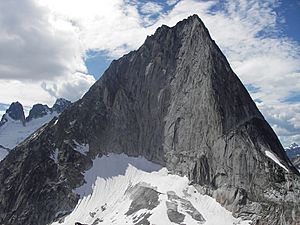 The east face of Bugaboo Spire.
This route tackles the right-hand skyline in the east face photo. Gain the Bugaboo/Crescent col by making your way up the Crescent Glacier to its highest point and scrambling (4th class) up the extreme left side of a slabby grey-green area for about 180m. You are then on the ridge joining Crescent and Bugaboo; follow blocks and a large crack up this to the "rope-up terrace", a white area where dykes on the east face join the ridge. From here, 12 pitches up to 5.8 (or so) gain the north summit. A few meters before the north summit, a rappel (pitons) down the east face about 6m takes you to a ledge. Follow this behind a large boulder and more ledges to a flat area south of the north summit. Follow an exposed 4th class ridge down about 160m to a col and then follow cracks in the slab ahead to a distinct notch. From here, you can rappel down ramps to the south and follow ledges to above the gendarme on the Kain route. Alternatively, you can climb horizontal cracks above at 5.10 to the south summit. From either place, follow the Kain route down; 6 or so rappels and some 4th + 3rd class downclimbing. One of the "50 Classic Climbs of North America"

All content from Kiddle encyclopedia articles (including the article images and facts) can be freely used under Attribution-ShareAlike license, unless stated otherwise. Cite this article:
Bugaboo Spire Facts for Kids. Kiddle Encyclopedia.